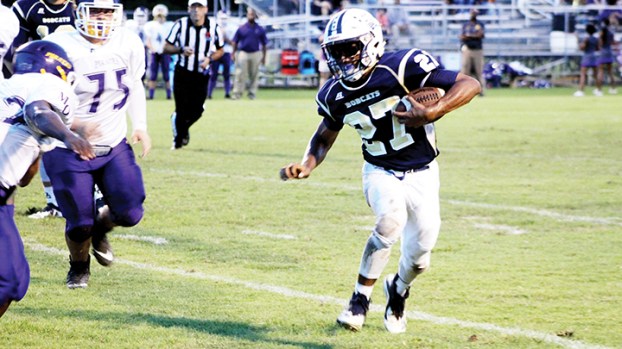 Photo by Cliff Furr Bogue Chitto running back Damarcus Godbolt looks for running room against Mount Olive. Godbolt and the Bobcats look to break a streak of four consecutive Loyd Star victories in the 2018 Possum Bowl tonight at Bogue Chitto.

The 2018 edition of the Possum Bowl looks to be a solid matchup on paper, as the streaking Bogue Chitto Bobcats (3-3) host the Loyd Star Hornets (3-3).

Since that hot start to the season Loyd Star has lost three games in a row while taking on Wesson, Stringer and Pisgah. Bogue Chitto coach Gareth Sartin knows that the Hornets have been facing some heavy hitters in recent weeks and he sees a very good Loyd Star team on film.

“They’ve got a physical line that gets off the ball well and a strong group of ball carriers,” said Sartin.

Leading that group of rushers is senior fullback Zach Baker, who has run for 460 yards and four touchdowns. Sophomore Eric Birch is second on the team with 363 yards on 60 carries. He’s scored a team-high six touchdowns.

Senior quarterback Dane Smith had his best statistical game of the season in the 42-30 loss to Pisgah. Smith went 10-of-13 for 135 yards and a touchdown.

Bogue Chitto mirrors Loyd Star in that they also like to spread the ball around to several running backs.

Sophomore Owen Anderson leads Bogue Chitto with 382 yards on 48 carries. He’s followed by senior Damarcus Godbolt and his 269 yards on the ground.

Quarterback Shaw King has scored a team-high five rushing touchdowns. King, a sophomore, has impressively progressed in his passing through the season, as he’s posted 708 yards on 46 completions. King has thrown for seven touchdowns.

One area the Hornets might have a clear advantage is special teams. Smith is the team’s punter and averaged 39 yards per punt against Pisgah. Loyd Star also has one of the most reliable kickers in the area in senior Cole Carpenter. Carpenter is 11-for-13 this season on PAT kicks.

“There’s definitely a buzz when you’re preparing to play a county rival and it’s also your first region game,” said Sartin. “We’re going to have to tackle well in the open field and try to limit big plays. I expect we’ll have a great crowd on both sides of the field.”

Cobras not backing down from Columbia

Don’t back down. That’s the message that Wesson (4-1) head coach Jeremy Loy is giving his team as they prepare... read more