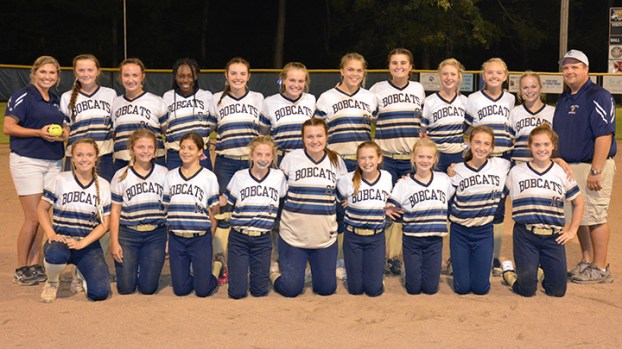 Photo by Stacy Leake/The Bogue Chitto Lady Bobcats (11-7) captured their district championship with a 13-3 win over Perry Central on Thursday night. Bogue Chitto will host a first round playoff game on Oct. 6. The Lady Bobcats are coached by Kris Smith and Candace McDowell.

The Bogue Chitto Lady Bobcats captured the Region 8-Division I slow-pitch softball championship on Thursday night with a 13-3 whipping of Perry Central.

“We’ve been really hitting the ball well lately,” said Smith. “Last weekend we went 3-0 in the West Harrison tournament and beat some good teams and that got us on a roll.”

Against the Lady Bulldogs on Thursday Bogue Chitto got the usual steady production and power from senior Karly Leake and sophomore Julianna Frazier as both hit home runs. Leake also added a triple and a single and Frazier hit an additional single. Baileigh Jackson hit two singles. Stevie Montgomery hit a single and a double and Kylie Chapman added a single as did Julianna Bartram. Lynsey Cooper also hit three singles for Bogue Chitto.

Bogue Chitto is scheduled to wrap up the regular season with a trip to Lawrence County today for their tournament and a visit to Meadville on Monday to play Franklin County. The final regular season game for Bogue Chitto will be on Tuesday when it hosts North Pike for a varsity doubleheader. The Lady Bobcat seniors — Leake and Jackson — will be honored that night.

As district champs, the Lady Bobcats know they will host a playoff game on Oct. 6.
“We’re still not sure exactly who we’ll play yet, it might be McAdams,” said Smith. “We do know we’ll host and our girls are excited about that.”