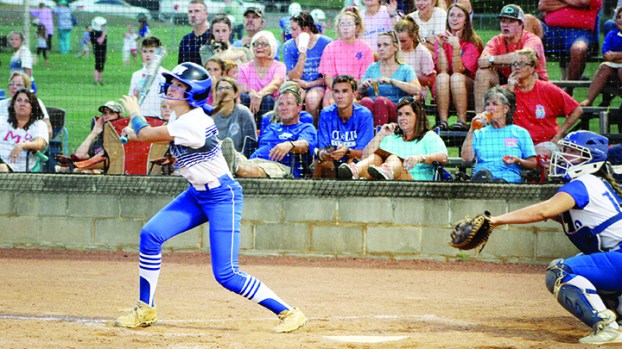 Photo by Cliff Furr BA freshman Madison Moak slaps a triple against Adams Christian. Moak had eight hits and seven RBIs for the Lady Cougars in their 3-0 run at the MAIS State Tournament this weekend.

The Brookhaven Academy Lady Cougars (37-3-1) have moved on to the championship series of the MAIS AA Fast Pitch State Tournament after three consecutive wins at the Magee Sportsplex.

On Saturday the Lady Cougars opened tournament play with a 22-4 shellacking of Benton Academy. They closed the day with a 9-1 win over Newton County Academy.

On Monday morning BA took on Central Holmes Christian in the finals of the winners’ bracket. With a 9-3 win in that game the Lady Cougars move on to the championship series against Clinton Christian. BA will travel to Clinton on Wednesday for the first game and will then host game two at Brookhaven Academy on Saturday. If game three is necessary, it will follow the conclusion of game two.

In the win over Benton the Lady Cougars got five RBIs apiece from freshman Abby Grace Richardson and sophomore Madi Smith. Smith crushed a grand slam and Richardson hit a home run as well. BA put up a whopping 18 hits as Madison Moak and Hallie Creel had three hits apiece. Emily Claire Felder picked up the win in the circle for Brookhaven.

In the win over Newton it was Moak leading her team at the plate with four hits including two singles, a double, and a triple. Madi Smith pitched her team to victory by striking out four and scattering eight hits. Richardson again homered while knocking in four RBIs.

The game with Central Holmes was close until BA exploded for five runs in the top of the fourth inning. BA went on to score four additional runs in the sixth inning as the team outhit Central Holmes 9-6 in the game. Richardson homered in her third consecutive game. She plated two RBIs as did Moak and Felder. Felder was masterful in the circle giving up only two earned runs on six hits while striking out eight.

To beat Clinton twice, a feat the Lady Cougar achieved last week at the South State Tournament, BA coach Becky Flowers says her team will have to overcome strong pitching from the Lady Warriors.

“We’ll have to battle at the plate as they have a very strong pitcher,” said Flowers. “We hit the ball really well this weekend and we’ve gotten great pitching as well. No matter the outcome we’ve had a great season and I couldn’t be prouder of the composure and poise that our girls have shown all season.”

Brookhaven Academy junior goal keeper Olivia Lewis and her teammates will be in action tonight in the first round of... read more