Officer White honorably served his country in the Army National Guard in Operation Enduring Iraq Freedom. He then became a police officer serving at the Brookhaven Police Department where he laid down his life for his community serving in the line of duty.

Preceding him in death were his grandparents, J.C. White Jr. and Sally Turnage White.

If you would like to leave a word of sympathy to the White family, you may do so at www.riverwoodfamily.com. 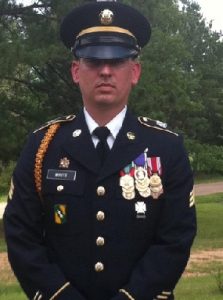