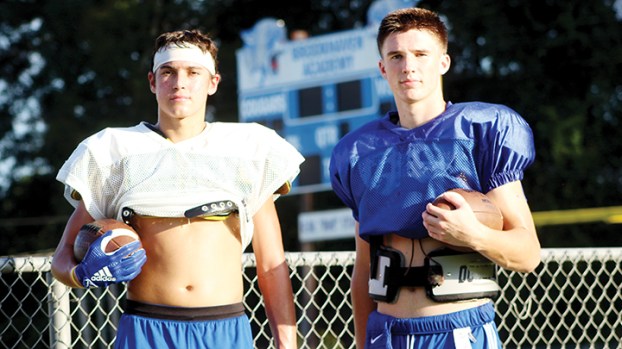 Photo by Cliff Furr From left, wide receiver Cade Brown and quarterback Dawson Flowers combined for three touchdowns in BA’s 23-22 win over Centreville. .Academy on Friday night. Flowers found Brown on two 5-yard touchdown throws and a 22-yard score in the fourth quarter that pulled the Cougars within two points of the Tigers.

Cade Brown was all over the field on Friday night in Brookhaven Academy’s 23-22 win over Centreville. That’s not an exaggeration either.

He literally lined up in a different place on the field nearly every play. Wherever he lined up, quarterback Dawson Flowers found him. Flowers went 19-of-27 passing for 280 yards, and Brown caught 17 passes for 242 yards and three touchdowns. For their combined excellence in passing and catching, the senior duo has been named The Daily Leader’s Co-Offensive Players of the Week.

Without getting too deep into the weeds of football terminology, Brown lined up at different times as the X, Y and Z receiver. He also lined up beside Flowers as a running back and caught passes out of the backfield. Brown even attempted two passes, one of them on a toss back to Flowers that failed.

Before Friday, Brown had never been moved around the field like that before.

“Coach Rushing told me that the plan was to move me around and line me up in different spots, in the slot and out wide as well, so Centreville couldn’t predict what was coming,” said Brown.

On the first BA series, Flowers gave the ball to Brown on a jet screen that was gobbled up at the line. The next play, Brown stood beside Flowers in the shotgun formation, hands on his knees like a running back. On the snap Flowers rolled to his right and Brown ran a shallow route through the middle of the Tiger defense. The linebacker assigned to cover him couldn’t keep up with the speedy receiver. Flowers gave the pass a side-armed flick and Brown ran past the defense for a 5-yard touchdown that put BA up 7-0.

“Moving Cade around gives us a chance to get some different matchups and that’s one that was easy to take advantage of,” said Flowers. “Rolling to my right and throwing that pass is a lot like making a throw from shortstop, so as a baseball player it feels natural.”

Brown actually caught two passes from backup quarterback freshman Tyler Fortenberry on the second Cougar drive. It was a pass he didn’t catch on that drive that could have been a disaster for BA.

Brown was reaching for a Fortenberry pass on a quick screen at the line when a Tiger defender came in with his head down to break the play up. Brown took a sharp shot to the ribs and writhed in pain before limping to the sideline for a break.

The second touchdown connection for the two came just before the end of the third quarter. Flowers had tried to hit Brown on a slant and threw a missile that went over the head and hands of his receiver and the defensive back. Flowers came back to the exact throw two plays later, but this time he slowed down and waited for Brown to get fully inside the corner. The throw was softer and hit his receiver in stride.

“I planted my outside foot and made it look like I was moving outside and then I cut back in front of the corner before he had time to react,” said Brown.

In the fourth quarter — with their team still trailing — Flowers started looking for Brown on the longer throws. They hooked up to start the quarter on a 31-yard gain in which Brown jumped and turned in mid-air to shield the defensive back from the ball.

The duo would pull BA to within two points when they connected on a 22-yard scoring throw with six minutes left in the game. Centreville only rushed four and Flowers stood strong, delivering a high, arching pass that aimed for the back pylon. Brown was so draped by the defender that pass interference was called on the play. It wouldn’t matter, as Brown extended and dove to make the catch as he slid on his back towards the corner of the end zone.

“When I saw the safety was hugging the center of the field pre-snap I knew that Cade would be open for the fade in the back of the end zone,” said Flowers.

Their biggest connection came with under a minute remaining, when the duo linked up for a 22-yard pass and catch that would set up the game winning field goal.

The play design wasn’t based on anything tricky, but individual efforts to execute made the difference.

Brown ran five yards and turned toward his quarterback. Flowers whipped out a quick pass that was aimed right at his receiver’s chest. Brown spun quickly to the outside to make the first defender miss. All told, five Centreville defenders had a shot at Brown before they brought him down at the five-yard line.

“I knew as soon as I caught it that if I spun outside I would be free of the defender,” said Brown. “He broke towards the ball and tried to pull me down and I turned away from his momentum.”

That final pass and catch would be the culmination for the duo as a few plays later Corey Case would nail the game-winning 19-yard field goal and BA had beaten Centreville for the first time since 2010.

There probably aren’t many things in your life that you love more than Braden Ezell loves playing football. Ezell has... read more