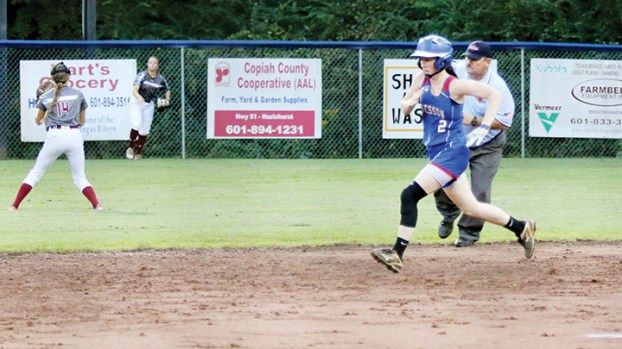 Photo by Lisa Smith Junior Anna Claire Crow of Wesson heads towards second base Tuesday against Lawrence County. Lawrence County would capture the region championship by way of their 12-9 win in nine innings.

It was wonderful weather and a great afternoon for softball Tuesday evening, as fans packed the park to see the hometown Wesson Lady Cobras fall just short of the region title in a 12-9 loss to Lawrence County.

For Wesson to capture the district title, they needed to beat the Lady Cougars by at least four runs. The game would go to extra innings, but in the ninth the Lady Cougars pulled away for a victory that gave them first place in slow pitch Region 7, Class 2.

Lawrence County wasted no time in the first inning, as they posted a run when Skyler Speights drove in Julianna Johnson with an RBI double.

The Lady Cobras answered back in the bottom of the first when leadoff batter Arie Douglas grabbed a single, followed by an Anna Claire Crow sacrifice fly later in the inning that tied the game at 1-1.

In the Lawrence County side of the third, Johnson reached safely with a single, and then Speights got her second hit of the game — this one a two-run home run — to give the Lady Cougars a 3-1 lead.

Wesson answered back, as Douglas reached safely with a single and Laynee Crapps followed her with a two-run home run of her own to tie the game up 3-3.

The Lady Cobras were not done, as Crow and Shelbi Maxwell would hit back-to-back doubles to plate another run. Catherine Wilson hit an RBI single that put Wesson up 5-3.

The Lady Cobras extended their lead an inning later when Crapps smashed a three-run home run to put Wesson up 8-3.

The Lady Cougars got all five runs back in the fifth inning with RBI singles by Wilson and Speights, and a three-run home run by Abbie Errington that tied the game 8-8.

The score of 8-8 would stand and carry things into extra innings until the Lady Cougars took command in the top of the ninth.

Speights gave Lawrence County the lead with an RBI single that was followed by another three-run home run by Errington that made it 12-8.

The Lady Cobras tried to put something together in the bottom of the ninth, as Douglas and Crow reached safely, followed by a Maxwell RBI that cut the lead to three runs. Wesson had runners at first and second with the tying run at the plate, but the Lady Cobras couldn’t manage to add another run.

First year head coach Marc Howard was excited for his team to take the district title as they eye a deep post-season run.

“I am excited about the win and happy for the girls for winning the district — I am always tough on them because I feel they need it in order to prepare them for games like tonight,” said Howard. “I am proud of them for fighting the entire game and finding a way to get the win.”

Wesson coach Michelle Nunnery was proud of the fight shown by her girls.

“This was a great high school softball game, even though we came up short I was proud of my girls for playing hard and showing energy and fire,” said Nunnery. “Lawrence County has a good team, so I knew it would be a tough game, I hope we can continue playing with this much energy as post-season play begins this weekend.”

Franklin County — the third-place team in the region — will travel to Florence on Saturday.

The West Lincoln Lady Bears came storming back from a five-run deficit on Tuesday night to top the Brookhaven Lady... read more