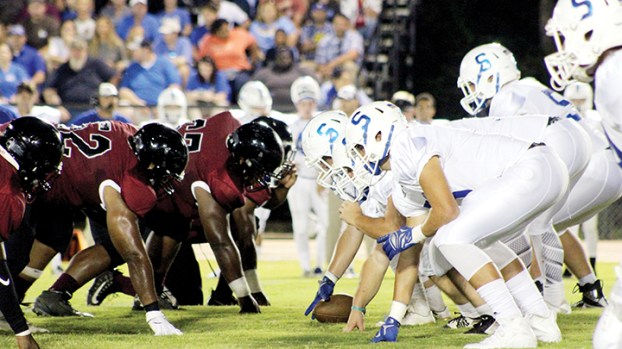 Photo by Cliff Furr The Lawrence County defense forced turnovers on the final two Sumrall drives Friday in a 28-21 victory.

When the Friday-night deadline is looming — and the sports page is coming together for the Saturday edition — there comes a time when some games deserves headlines like “THIS WAS AN AWESOME FOOTBALL GAME.” You want to do justice to how good the game was in limited space and time.

There were a couple of games in the area that could have used that headline this past week. One of them was Lawrence County knocking Sumrall from the ranks of the unbeaten with a thrilling 28-21 win in Monticello.

It was a game of team versus individual.

Lawrence County has an identity. They run the ball, play physical on defense and try not to beat themselves. Their Wing-T offense lets their opponent know that to stop Lawrence County, they’ll have to be very physical at the line of the scrimmage.

Sumrall has a well-coached football team as well. However, if you take their quarterback, Dannis Jackson, out of the equation, Lawrence County would be an easy three-touchdown favorite. Jackson will play wide receiver in college at Ole Miss, but he is a very good high school quarterback.

At times it looked like Jackson must have been wearing a jersey covered in Crisco, as the Cougar defenders slid off of tackle attempts that seemed like sure sacks, but instead turned into long ground gains by the quarterback.

Jackson had his team in position to score the go-ahead touchdown late in the game. The score would have nearly sewn things up, as Lawrence County had issues moving the ball in the second half.

Jackson held the ball gingerly and high on his arm as he moved toward the Lawrence County sideline on a run that looked like it was going nowhere. Cougar defensive back Tywan McLaurin ran up beside Jackson and didn’t try to tackle him — instead, he attacked the ball with both hands and ripped it away from the stunned quarterback. After that, no one was going to catch McLaurin as he ran for the end zone like a man possessed.

Sumrall had one more shot at tying it up, but Cougar Perez Tyler ended the game with an interception. Lawrence County finishes their regular season home schedule this week against Purvis before closing the season with trips to Greene County and Poplarville.

Speaking of games that were awesome, the Loyd Star Hornets made history on Friday at W. E. “Sambo” Smith Field. In 2011, the Amite County Trojans moved down from 3A to the 2A classification. Since then the Trojans were 20-0 versus teams from Lincoln County.

Make that 20-1, as the Hornets beat the Trojans 50-46 in a back-and-forth battle on Friday night. Hornet quarterback Dane Smith had the biggest game in his two years under center. Smith finished 11-of-15 for 168 yards and one touchdown.

Sophomore running back Eric Birch was sensational for Loyd Star, as he rushed 12 times for 161 yards and four touchdowns.

Loyd Star saw a 22-8 lead in the first half turn into a 24-22 halftime deficit. Loyd Star would then respond with two straight scores after the half to lead 36-24.

The Trojans cut the lead to four points late in the game, but the Hornet offense killed some clock before giving Amite County the ball back in the final minute, and the Loyd star defense stood strong to preserve the win.

Loyd Star travels to Enterprise for the Sting Bowl this week.

The Bears broke a five-game losing streak with a 40-22 win over Enterprise. Freshman Enrico Price was the man for West Lincoln, as he ran 12 times for 179 yards and two scores. Junior Michael Brothern inched closer to a 1,000-yard season with 102 yards rushing on 11 carries and three touchdowns. West Lincoln is off this week before closing the season with two big games against Bogue Chitto and Loyd Star.

Enterprise was only down 20-14 with five minutes remaining in the first half but ended up trailing 26-14 at halftime. A 14-0 third quarter by the Bears ended up putting the Yellow Jackets in too deep of a hole to dig out of.

Enterprise has games left against Loyd Star, Amite County and Bogue Chitto as they seek their first win of the season.

The Bobcats played their final non-division game of the season when they went to Pisgah and were defeated 54-26 by the Dragons.

The Dragons are one of the top teams in 2A and the Bobcats had some success moving the ball in the second half after trailing 34-0 at halftime. Bobcat quarterback Shaw King set a new career high for attempts and yards with 312 yards and three touchdowns on 23-of-43 passing. King — a junior — crossed the 1,000-yard pasing mark for the season in the game. King is the first 1,000-yard passer for the Bobcats since Brock Roberts was a senior in 2013.

The Bobcats host Amite County this week in what should be an offensive shootout.

Wesson hosts West Marion this week in a game that is huge for the Cobras’ hopes of making the playoffs.

Coming off of a 41-20 loss to Seminary, the Cobras are desperate to get their first region win that will put them in the running for one of the final two playoff spots in Region 8-3A. Winning against West Marion this week and Tylertown next week would be huge for putting Wesson in that position.

The Cougars play their third and final game in Louisiana this season on Friday when they travel to Farmerville to take on the Union Christian Academy Lions.

The Cougars beat Union 35-12 last season and are coming off of a 42-16 victory over Benton Academy. Brookhaven Academy led 42-0 at halftime and got plenty of playing time for the younger Cougars on the roster.

The Panthers got a 21-20 win at home against a Forest Hill team that only has one win this season. Brookhaven will have to improve this week as they go to Natchez to play a Bulldog team that is 2-1 in their region.

Last season the Bulldogs put a scare into Brookhaven before the Panthers pulled away late to take a 42-33 win at King Field.

The Wolves waxed a good East Central team 42-17 last week on the road. Co-Lin rushed for 334 yards as they moved to 3-0 in the MACJC South Division. Hinds comes to Wesson this week in a game that the Wolves must win to keep pace with Jones in the division race.

Several area slow-pitch softball teams will be in action Tuesday as the second round of the MHSAA playoffs begin. All... read more