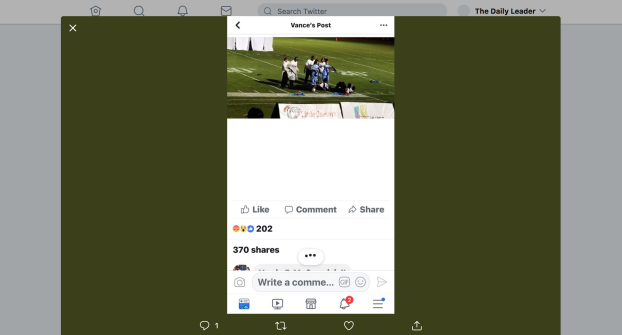 Pastor: Students not to blame for halftime show

The pastor of Grace Community Church cautioned that the students involved in the controversial halftime show at Brookhaven’s King Field Friday night are not to blame.

“I don’t feel like the kids should have to suffer the consequences. The skit itself, I don’t think was directed at what had happened. I think it was poor discretion on the director’s part considering everything the community had been through,” he said Monday. “We teach students to do what the teachers tell you to do and don’t talk back. You can’t blame the students.”

The performance included fake ­guns in a dramatized scene. Students dressed in scrubs can be seen pointing the fake weapons at other students lying on the ground. There were reports that the scene was an interpretation of the movie “John Q.”

Many who saw images of the performance online were upset at the make-believe gunplay, which came just days after the shooting deaths of Brookhaven police officers Zach Moak and James White, both of whom were killed in the line of duty recently.

Sterling also addressed the racial tension that has surfaced in social media comments following the performance by the Forest Hill band.

“This goes deeper, as far as the racism, as far as the negative tension. This goes beyond the officers being shot, beyond what happened Friday night,” he said. “The tension has been brewing for a while and no one really wants to admit it or face it. Racial tension is prevalent. Denying it is not going to make it go away. And it’s not just white, there’s some racial tension in the black community.

“The back and forth, it’s not going to solve anything. We’re only self-imploding. No one is going to win. It takes all of us getting along together,” Sterling said. “That’s where somebody has got to be level-headed enough to say, ‘This has got to stop,’ and then admit what’s out there. There is a lot of tension on blacks’ and whites’ side.”

Outrage over the halftime performance by the Forest Hill marching band Friday night continued to grow over the weekend and into this week. The Forest Hill band director is on administrative leave while the school district investigates, according to media reports.

“It wasn’t about the guns Friday night, it was what it signified. That was the issue,” Sterling said. “It signified the law enforcement being shot and that was poor discretion on the director’s part.”

Brookhaven Mayor Joe Cox said Saturday he had spoken with Jackson Mayor Chokwe Antar Lumumba, who informed him the Forest Hill band director has been suspended.

“I have been and will continue making various contacts, a few of which include Governor Phil Bryant, our local state legislators, Brookhaven School District, Mississippi Department of Education, Mississippi High School Activities Association, Mississippi Department of Public Safety, Jackson Public School District and Forest Hill High School, to ensure the matter is sufficiently addressed and fully investigated not only internally, but by a state level Select Committee or the appropriate state agencies,” Cox wrote on Facebook. “This is no longer simply a Jackson Public School District matter. There must be accountability and serious consequences for this demonstrated act of violence and blatant disregard for school policy. In addition, I am asking that all Forest Hill High School and Jackson Public School System staff, faculty, and administrators with prior knowledge and approval of this halftime routine be held accountable and terminated from employment, this routine be removed from the Forest Hill Band program, and that future Forest Hill Band routines be monitored and approved at the state level prior to each performance.”

Brookhaven School District Superintendent Ray Carlock released a statement Saturday on the incident: “We appreciate the JPS Superintendent Dr. Errick Greene and the administration, band director and coaches at Forest Hill High School for reaching out to us today to offer apologies for the halftime show Friday night. In light of the recent tragic deaths of two Brookhaven police officers, it is important that our school districts stand united in support of law enforcement.”

The Mississippi Dept. of Education called the performance in poor taste and inappropriate.

Criticism poured in from the governor, state lawmakers and the Mississippi Association of Police Chiefs.

“We are baffled at why someone would think that it’s OK to allow children to be armed with AR-15s, and although they are fake weapons, to hold law enforcement at bay. We are very outraged. That was a very distasteful performance,” Walter Armstrong, Mississippi Association of Police Chiefs president, said on Fox & Friends Monday morning. “While we support our youth … you would think someone who was in charge of those students would have known better. It could not have happened at a worse time.”

Sterling expects there will be a community meeting organized soon, but doesn’t have details.

“I just pray that the Lord will lead someone to at least sit down and say, ‘Let’s stop the judging, let’s stop the finger-pointing and let’s just discuss,’” he said.

An employee of Copiah-Lincoln Community College reportedly used a racial slur online when criticizing the halftime show. The college released a statement that reads: The opinions expressed in recent social media posts by an employee do not reflect the views of Copiah-Lincoln Community College. The administration is looking into this personnel matter …”

Outrage over a halftime performance by the Forest Hill marching band on King Field in Brookhaven Friday night continues to... read more