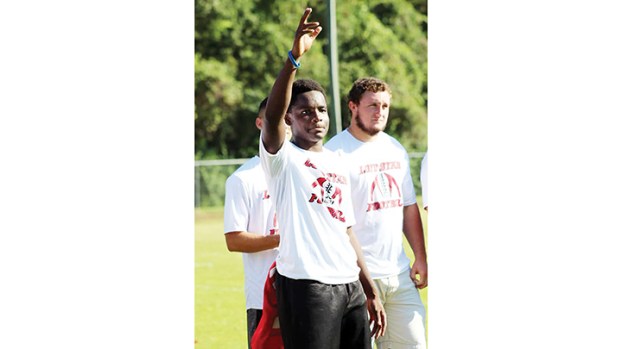 Photo by Katie Furr Eric Birch rushed 12 times for four touchdowns and 161 yards against Amite County in a 50-46 Hornet victory.

Loyd Star sophomore running back Eric Birch has moved around as he’s grown up.

Birch has been to school at Bogue Chitto and Wesson, and also lived in Florida and Michigan. Like the old Johnny Cash song says, “he’s been everywhere, man.”

On Friday night, Birch was everywhere against Amite County in a 50-46 Hornets win. Birch carried the ball 12 times for 161 yards and four touchdowns. For that performance, he has been named The Daily Leader’s Offensive Player of the Week.

Birch averaged 13.4 yards per carry, as the Hornet offense moved the ball up and down the field against the Trojan defense. He also caught two passes for 11 yards in a win that broke a 20-game win streak by Amite County over Lincoln County competition.

For the season, Birch has rushed 80 times for a team high 601 yards and 10 touchdowns. With the Hornets using a stable of backs to gain yards on the ground this season, Birch never knows when he’ll get his number called. The goal is to stay ready.

“With guys like Zach Baker, Je’Mario Clay, Zach Nevels and Quan Berry as our senior running backs, we’ve got a lot of different guys that can carry the ball,” said Birch. “I actually thought my cousin, Versie Wilson, who’s a ninth-grader, was going to get the start against Amite County. Coach came over to me just before the national anthem and told me to get out there on the first series.”

Birch could tell the game would be a back-and-forth fight and his line was opening up huge holes for him to run through.

In the second half, Birch scored from 25 yards and 43 yards to put the Hornets back on top after they trailed at halftime. Birch also set up the final Hornet touchdown of the game with a fourth-quarter run that got Loyd Star inside the 10-yard line.

On his 43-yard run that was his longest scoring run of the game, Birch says he was doing what he did all night — following his blockers.

“It was a power run and my blockers had pushed guys so far downfield, I knew I was going to have a chance to break a long run,” said Birch. “Our line was dominant all night.”

Birch is the son of Renee Birch and Jackie Barlow. With a childhood spent in the South and Midwest, Birch smiles when asked who his favorite football team is.
“Don’t think I’m on the bandwagon when I answer this,” Birch says as the suspense builds. “I’m an Alabama fan. I’ve been a Crimson Tide fan since I really started caring about college football six years ago.”

Birch says that Loyd Star head coach Brian Ford has been echoing Alabama leader Nick Saban when he talks about the focus that his team must have as they finish the season against Enterprise and West Lincoln.
“Coach doesn’t want our success to go to our head,” said Birch. “We’ve still got two important games left to play and we’ve got big goals left to reach. We’ve got to focus on being our best every day.”

Area high school cross-country teams took part in their most challenging race of the season on Saturday when they traveled... read more