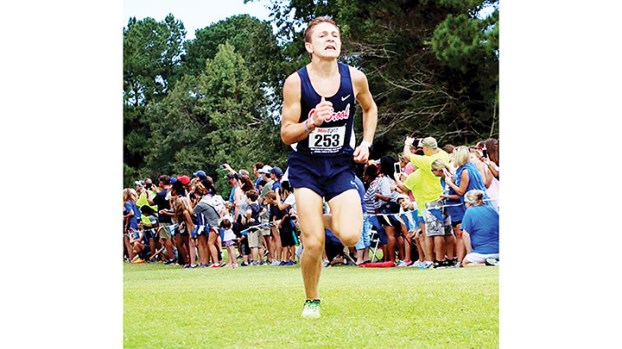 Area high school cross-country teams took part in their most challenging race of the season on Saturday when they traveled to the familiar paths of Choctaw Trails in Clinton for the Watson Ford Invitational hosted by Mississippi College.

The fields for both the boys’ and girls’ events were packed with out-of-state schools and some of the strongest teams in the state. The larger schools were grouped together in a race titled Division I, and the smaller schools ran together in a Division II race.

Freshman Aubree Britt of Loyd Star took first place in the Division II girls’ race with a time of 20 minutes, 52 second in a field of 135 runners. Lucie LeBlanc of Brookhaven Academy was the other high finisher from Lincoln County with a time of 26:24, and was closely followed by Marlee Gunnell of Enterprise, who finished in 27:10.

The girls’ Division I race was won by freshman Brooklyn Biancamano of Long Beach with a time of 17:58, which was more than two minutes faster than her nearest competition. Bailey Pounds was the top finisher for Brookhaven High with a time of 21:14, which was good enough for 20th place in a field of 310 runners.

In the team competition Brookhaven finished fifth in a field of 26 teams. Baker High (Louisiana) took the team title. Brookhaven was the second-highest-placed team from Mississippi, as they were one place behind Ocean Springs.

More importantly, the Lady Panthers were tied with Saltillo High School. Saltillo has won three straight 5A state championship and nine of the last 10 5A titles.

In the Division I boys’ race, junior Jacob Britt of Brookhaven High was the top area finisher with a time of 17:25, which was good enough for 13th place. Geoffrey Cole of Airline High (Shreveport, Louisiana) was the top finisher (16:32) in the field of 367 runners.

Bartlett High School out of Tennessee was the top finisher in the team competition, as they beat out 29 teams and just edged out Airline High. Ocean Springs was the top Mississippi finisher in third place and Brookhaven was the next-best Magnolia State team in sixth place.

Just as with the girls’ race, the most important opponent for BHS was Saltillo, as the two teams finished first and second in the 5A team competition in 2017. Brookhaven finished well ahead of Saltillo on Saturday by scoring 184 points to 253 by Saltillo.

Brock Kelly of Tupelo Christian was the first-place finisher (16:55) in the Division II race, which had a field of 202. Leondre Dodds (20:33) of Loyd Star and Josh Richardson (26:34) of Enterprise were the top indyuvial finishers for their schools.

Most area cross-country teams will be running Saturday at Madison Middle School in a meet hosted by Madison Central.

The Brookhaven Academy Lady Cougars came up just short in their bid for the MAIS AA State Championship Saturday, as... read more