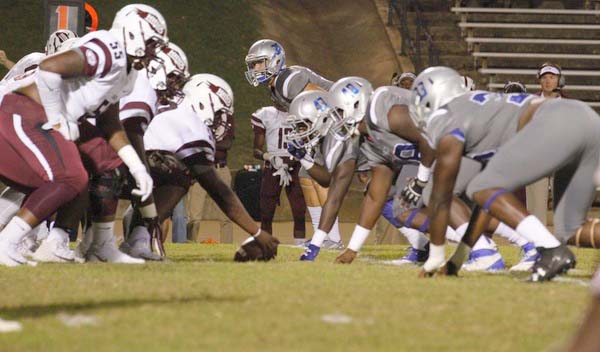 Photo by Co-Lin Sports Information The Wolves’ offensive line readies for the snap in a game earlier this season.

The Copiah-Lincoln Community College Wolves are back in Stone Stadium this week as Hinds travels to Wesson for an MACJC South Division matchup. Co-Lin (4-2, 3-0) enters Thursday’s game off a 42-17 win over East Central Community College while the Hinds Eagles (4-2, 2-1) are coming off a 48-19 victory over Coahoma Community College.

The game will be the 81st meeting between the Eagles and Wolves. Hinds currently leads the all-time series 42-35-3. The game will serve as Co-Lin’s annual Breast Cancer Awareness game and fans are asked to wear pink to show support. For those that cannot attend, the game will be streamed live at colinatheltics.com or can be heard live at WMJU 104.3 FM in Brookhaven.

Co-Lin’s offense was nearly unstoppable last week as the Wolves racked up 532 yards of total offense, the most since 2014. The Wolves were led on the ground by sophomore Deion Dampier who posted a career-best 179 rushing yards and two scores. The game brings Dampier season total to 496 yards and seven touchdowns. Hayden Davis led the Wolves’ passing attack with 190 passing yards and three touchdowns. The sophomore connected with freshman wideout Kundarrius Taylor six times, two for touchdowns, for 103 yards. Taylor currently leads Co-Lin’s receivers with 256 yards and five scores.

Defensively, Swayze Bozeman continues to lead the Wolves with 54 tackles. Taijh Alston leads Co-Lin in sacks with 2.5, while RJ Jarrett leads the team in tackles for loss with 5.5. Co-Lin gives up an average of 134.7 passing yards per game, which is third best in the MACJC.

Hinds is led offensively by sophomore quarterback Tylan Morton who has thrown for 1,105 yards and 11 scores. Don Ragsdale leads the Eagles’ ground game with 491 yards and nine scores, while Eric Clark leads the receiving corps with 382 yards and five touchdowns.

Defensively the Eagles give up an averaged of 202.8 yards in the air and 186.7 yards on the ground per game. Amos Robinson, who has wrapped up 46 tackles on the year, leads the Eagles. Robinson also leads Hinds in interceptions with three.

A Co-Lin victory on Thursday will put the Wolves in a very good position for the MACJC playoffs. As it stands, a win Thursday will all but solidify a playoff birth with the exception of Co-Lin losing it’s final two games combined with East Central winning their final three.

Cam Buckles has seen the growth of West Lincoln football in his four years of wearing the green and white.... read more