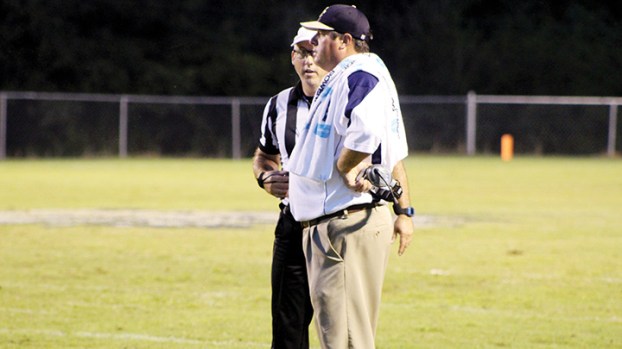 Photo by Cliff Furr Bogue Chitto coach Gareth Sartin consults with an official during the Bobcat’s win over Mount Olive.

The Bobcats (3-5) are looking for their first Region 7-2A win after dropping their conference opener to Loyd Star and losing a non-conference game 54-26 at Pisgah last week.

For Bogue Chitto to beat the Trojans, they’ll have to slow down Amite County quarterback Derick Cosby. Cosby passed for 221 yards against West Lincoln while also rushing for 43 on the ground.

Against Loyd Star, the Cosby show was an even bigger hit, as he passed for five touchdowns and 374 yards.

Stopping that potent Trojan passing attack will be the key for coach Gareth Sartin and his Bobcat defense.

“When the play breaks down and their quarterback starts to scramble, we’ve got to stay in coverage and not lose their receivers,” said Sartin.

Kickoff between the Trojans and Bobcats is scheduled for 7 p.m.

BA going on road to Farmerville

There is one more long road trip Friday night for Brookhaven Academy (5-2), as the Cougars travel to Louisiana to... read more