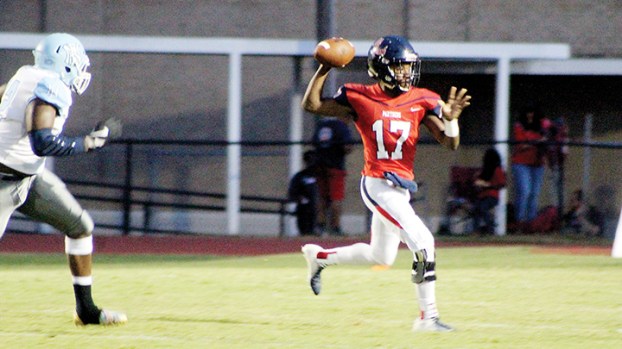 Photo by Cliff Furr/Sevante Quinn throws on the run against North Pike. Quinn has accounted for over 1,200 yards total offense in 2018.

Much riding on Panthers’ trip to Natchez

The Brookhaven High Panthers (5-2) travel to take on the Natchez High (5-2) Bulldogs Friday night in an important Region 3-5A matchup.

The teams are tied with identical 2-1 region records, and both trail West Jones and Laurel, who are both 3-0. That tie at the top will be broken tonight when West Jones travels to Laurel, and Brookhaven fans will be rooting for West Jones as the Panthers have yet to play the Mustangs, but dropped their game at Laurel earlier this season.

“They’ve got a good team,” said Peavey. “They’ll be balanced on offense and defensively they play sound football.”

Quarterback Paul Hargrave has stepped in as a first-year starter and put up solid numbers for Natchez. Last week, the senior signal-caller went 12 of 30 passing for 171 yards and two touchdowns in a 27-24 win over South Jones. The Bulldogs also got a big game out of senior running back Javontae Davis in the win over South Jones. Davis rushed 20 times for 142 yards.

Natchez has division wins over South Jones and Wingfield and a 35-0 loss to West Jones. In their non-conference schedule, the Bulldogs beat Jefferson County, Port Gibson and Wilkinson County. Their lone non-conference loss was to Jefferson Davis County.

Brookhaven is coming off of a closer-than-expected 21-20 win over Forest Hill.

One area the Panthers continue to try and improve is running the football. BHS has not had a 100-yard game by a running back since J.Q. Edwards gained 142 yards against South Pike in the third week of the season.

Senior quarterback Sevante Quinn went 8-of-12 for 80 yards and one touchdown in the win over Forest Hill.

The Panther defense has been stout all season, as they are only allowing 15 points per game since the season-opening loss to Pearl.

Kickoff between the Bulldogs and Panthers is slated for 7 p.m.

The Wesson Cobras (4-3) aim to get their first Region 8-3A win since moving into the division last year when... read more