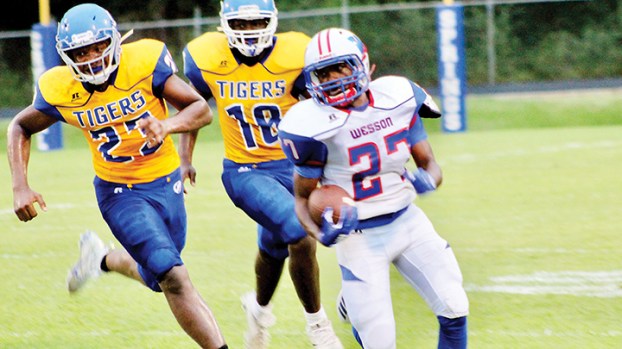 The Wesson Cobras (4-3) aim to get their first Region 8-3A win since moving into the division last year when they host the West Marion Trojans (6-2) Friday night in H. L. “Hook” Stone Stadium on the campus of Copiah-Lincoln Community College.

West Marion is a good example of just how loaded the region is. The Trojans started the season 6-0 before dropping games to Seminary and Jefferson Davis County when division play began.

Last season, the Trojans took a close 28-19 win over Wesson in Foxworth.

West Marion will test the Cobra pass defense more than any team in their division.

West Marion quarterback Jeremiah Holmes averages 182 passing yards per game, and has thrown 16 touchdowns and one interception in 2018. Senior Dontavious McGowen is his most explosive receiver — he’s caught 25 passes for 637 yards and eight touchdowns. Senior receiver Noland Miller has also caught a whopping 41 passes this season.

“They’re going to sling it around and we’ll have to be disciplined in our defensive assignments,” said Wesson head coach Jeremy Loy.

Other than the 33 points put up by Seminary in their game, West Marion has been stout on defense as well. Excluding the Seminary loss, the Trojan defense is only allowing an average of 12 points per game.

Cobras quarterback Antrelle Sims went 6-of-13 for 166 yards and one touchdown in a 41-20 loss to Seminary last week. Junior running back Damien Smith also scored on the ground for the Cobras last week. Wesson’s leading tackler, Chamar Martin, made 16 tackles and recovered a fumble against Seminary.