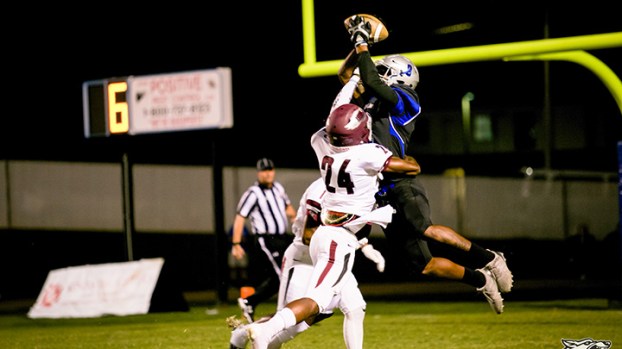 Co-Lin moves to 4-0 in division play

The Copiah-Lincoln Community College Wolves are now 4-0 in the MACJC South Division and 5-2 overall after a 41-27 home victory over the Hinds Eagles Thursday night.

The game was lopsided in scoring, with all 68 points being scored in the first half before turning into a defensive stalemate in the second. With the win — and an East Central Community College loss on Thursday — the Wolves have locked in a playoff spot for the 2018 season, Co-Lin’s first playoff bid in four years.

Co-Lin thrived on the big plays Thursday night, as the Wolves only ran 57 offensive plays, with the bulk of those coming in the second half.

Early in the first, Co-Lin’s DeMartre Collins returned an Eagle punt 35 yards to the Hinds’ 29-yard line. Coach Glenn Davis immediately went to the air, as Connor Mire found Kundarrius Taylor at the goal line, and Taylor fought his way in for the first score of the night. After the point after attempt from Ashton Garner, Co-Lin was up 7-0 with 7:21 on the clock in the first.

Hinds quickly rebounded with a five-play, 70-yard drive, capped off with a 34-yard toss from Tylan Morton to Eric Clark, but the Eagles failed to convert the point after, giving the Wolves a 7-6 advantage.

Co-Lin’s next possession was also helped by a big play, as Rico Owens broke out a 64-yard run down to the Eagles’ 1-yard line. Owens punched it in on the next play, but the extra point rattled off the upright, stretching Co-Lin’s lead to 13-6 with 4:31 remaining in the first.

After some stalled drives, Co-Lin’s T.J. Campbell took advantage of a muffed punt from Hinds’ Isaiah Latham. The fumble recovery put the Wolves on the Eagles’ 23-yard line. Owens picked up 20 of those yards, and Deion Dampier capped the two-play drive with a 3-yard halfback dive. At the end of the first quarter, Co-Lin led 20-6.

The Wolves, with the momentum on their side, continued to pull away, as Harrell Blackmon blocked Carson Flumm’s punt on Hinds’ ensuing possession. Blackmon also recovered the block and took it 32 yards to the end zone for a score. The scoop-and-score advanced the Wolves’ lead to 27-6.

Hinds found the end zone for the second time on their next possession after a kick return put the Eagles in Co-Lin’s territory. Don Ragsdale plowed his way in from six yards out to cut into Co-Lin’s lead 27-13. After a Co-Lin punt, the Eagles marched 50 yards on 12 plays to score again on another short run from Ragsdale, but failed to make the point after. With 3:25 left in the first half Co-Lin led 27-19.

Just when the Eagles seemed to get back in the ballgame, Mire connected with Taylor for the second time. Taylor took it 80 yards to score, Co-Lin’s longest passing touchdown in the last five years. The score put the Wolves on top 34-19.

Hinds once again scored on their next possession, pulling the score to just one touchdown, 34-27, but Co-Lin took over with 43 seconds remaining in the half. After a quick strike to Malik Heath for 13 yards, Dampier broke a 57-yard dash to the end zone with just 10 seconds left in the half. The big run stretched the Wolves’ lead to 41-27, a score that would stand to the end of the contest.

The second half was a defensive showcase, as neither team scored again. Co-Lin made several fourth down stands, including a goal line stand inside their own 1-yard line. The Wolves also forced three turnovers in the second half — two interceptions from Tyrus Wheat and a sack-fumble from Jalen Bedell that Taijh Alston recovered.

Co-Lin posted 348 total yards on the night on 57 plays, while the Eagles racked up 467 yards on 83 plays. Connor Mire was 14-for-26 in the air for 185 yards and two touchdowns. Rico Owens and Deion Dampier led the ground game with 122 and 79 yards, respectively. Owens had one score while Dampier had two. Kundarrius Taylor finished the night with 111 receiving yards and two scores, while Malik Heath finished with the most receptions — four — for 37 yards.

Swayze Bozeman led the Wolves on the defensive side in tackles with 10. Edwin Whitlock wrapped up eight tackles and had a team-high three pass breakups, while Jalen Bedell also had eight tackles, one sack and a forced fumble. Tyrus Wheat rounded out Co-Lin’s top tacklers with seven stops. Wheat also had two picks. Co-Lin totaled nine tackles for loss for 43 yards on the night.

Hinds was led by Don Ragsdale, who posted two scores and 214 yards on the night. Tylan Morton was 15-for-27 for 198 yards and one touchdown. Javon Antonio led the Eagles with 113 receiving yards. Defensively, Orlando Brown and Kirkland Horton led Hinds with eight tackles each, while Ivin White Jr. wrapped up three sacks.

Next Saturday’s game against Jones College in Ellisville is slated for a 2 p.m. kickoff. The game will determine the MACJC South Division winner, as the Bobcats are also 4-0 in the division.

The Lawrence County Cougars (6-2) wrap up their regular season home schedule Friday night at 7 p.m. when they host... read more