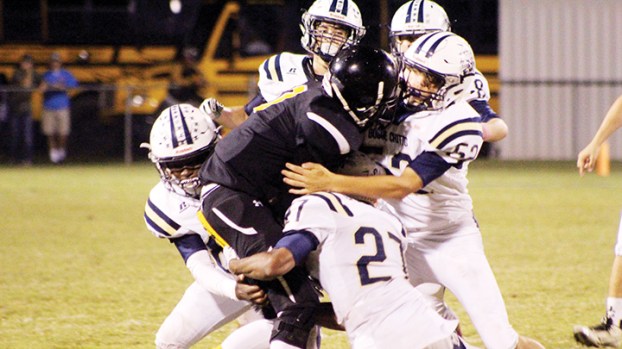 Trojans no match for Bogue Chitto

The Bogue Chitto Bobcats (4-5) served up a dish of domination to the Amite County Trojans (1-8) on Friday night as they were nearly flawless in all three phases of the game to take a convincing 49-8 win.

The Bobcat defense forced two quick Trojan punts to open the game and set the tone for the rest of the night. Amite County would not get on the scoreboard until two minutes remained and reserves were in for both schools.

The Bogue Chitto offense was like a Swiss Army Knife as a different tool was utilized on every Bobcat possession.

On special teams Bogue Chitto used short kickoffs to foil any attempts by the Trojans for long returns. That’s actually one of the most impressive things about the defensive performance as they held what had been a high-octane Trojan offense in check, even when they were starting most drives at the 50-yard line.

Senior linebacker Jermaine “Trooper” Black said his team knew that Amite County quarterback Derick Cosby had put up some huge passing numbers in recent weeks, but they felt like the game plan put together by their coaches had them more than ready.

“All week long coach had been stressing how important it was for the back side of our defense to stick with our receivers,” said Black. “We knew that we had to put pressure in his face and when we did that to start and then our offense got rolling, you could see them start to hang their heads.”

The closest anything came to going wrong for Bogue Chitto was when several players — Black included — cramped up. As Black spoke he had mustard stains on his jersey and pickle juice in hand.

The Bobcats got on the board with 6:09 left in the first quarter when Owen Anderson scored from 27 yards out. Quarterback Shaw King punched in the two-point conversion and the BC lead was 8-0.

In the second quarter King would run in touchdown from the 1-yard line to put his team up two scores. The scoring drive was highlighted by two long Brandon Lewis catches.

The following drive would be as close at the first-team Trojan offense would get to scoring. Cosby would run the ball down to the BC 9-yard line before a collision with his own blocker knocked the ball loose. Black recovered the fumble and Amite County would not get that close to the end zone again until the game had been long decided.

DaMarcus Godbolt scored the final Bobcat touchdown of the first half when he found the end zone from 19 yards away with 2:00 minutes remaining in the quarter.

Amite County got inside the red zone in the final minute of the half but a huge sack by Tyler Nehlig of Bogue Chitto stopped the threat and sent BC into the half with a 22-0 lead.

In the fourth quarter — on a fourth and 20 — King lofted a ball towards the end zone that was hauled in for a 29-yard touchdown catch by Lewis. Lewis looked like a man playing with a child when he went up over the smaller Trojan cornerback to high-point the scoring throw.

Lewis would follow that up by picking off the very next Amite County pass and returning it 45-yards into Trojan territory.

Following the Lewis pick the Bobcats would get their final score of the night on an 8-yard run by senior Evan Kyzar.

Kyzar was one of 15 seniors honored before the game. As Kyzar came off the field following his scoring run he could be heard telling a teammate, “I wish I could get four more years of plays like that.”

Bobcat head coach Gareth Sartin was all smiles in the postgame huddle as he addressed his team.

“Our defense set the tone from the start,” said Sartin. “We gang tackled and put pressure on the quarterback and got a really big stop right before halftime. Our offensive line did a great job of controlling the line of scrimmage against some much bigger guys.”

Bogue Chitto now sits at 1-1 in the division and travels to West Lincoln next week. The Bobcats will close their schedule in two weeks with a game at Enterprise.

For the first time in 2018, it felt like fall football weather as the Enterprise Yellow Jackets (0-8) hosted the... read more