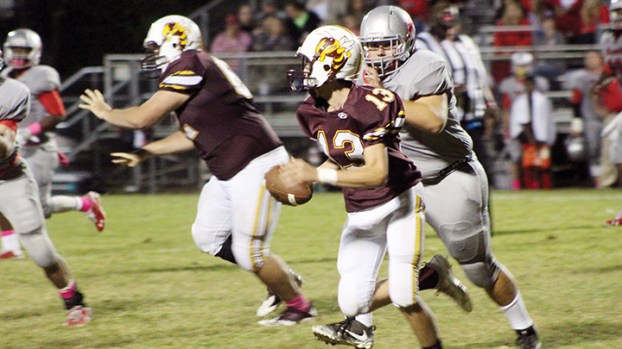 Postseason will be sorted out in final weeks

The final two weeks of the 2018 high school football season are upon us — for the most part that is.

There are a couple area teams that have one regular season game left to play, and all of the 5A schools in the state have three more regular season games remaining. These next few weeks will be when district standings get sorted out and we figure out who will host a playoff game, who will go on the road and who will put their shoulder pads up and start thinking about 2019.

It was a special night on Troy Smith Field as a large group of seniors were honored before the game against Amite County. Guys like Malik Richardson, DaMarcus Godbolt, Trooper Black, Warrick Cook, Tyler Nehlig, Brandon Lewis, Steven Allen and their classmates represent the good stuff about high school football.

As freshmen and sophomores, they took their licks on teams that finished 1-10 and 0-11. Now — on their senior night — they annihilated an Amite County team that has either won the district or placed second every season since moving down to 2A.

West Lincoln has two near 1,000-yard rushers in freshman Enrico Price and junior Michael Brothern. The duo will get plenty of carries against the Bobcats.

One area that Bogue Chitto has the advantage is the passing game. The Bears are averaging just 44 yards per game through the air while Bogue Chitto junior quarterback Shaw King is one of the top passers in the area and averages more than 150 passing yards per game.

The Hornets are off this week after a 61-22 win over Enterprise in the Sting Bowl. At 3-0 in Region 7-2A, Loyd Star is sitting in the cat-bird seat with one game remaining. They’ll definitely host a playoff game on W.E. “Sambo” Smith Field when the postseason begins, but they’d like to do so as the district champs. Loyd Star will conclude their regular season in two weeks with a big home game against West Lincoln.

Region 7-2A — which is made up of Loyd Star, Bogue Chitto, Enterprise, West Lincoln and Amite County — will match up this year in the playoffs with Region 6-2A in the first round.

Pelahatchie and Pisgah are firmly planted at one and two in that region, but the two remaining spots will be sorted out over the next two weeks. A win by Madison St. Joe over Puckett this Friday would put St. Joe and Mize in the final two spots. A Puckett win would have all three teams tied with one region win apiece.

As Enterprise goes to Amite County this week they should be buoyed by the Bogue Chitto win over the Trojans.

Coming into their game with the Bobcats, the Trojans were putting up some gaudy passing numbers recently behind quarterback Derick Cosby. Cosby is just a sophomore and is only 5-foot-5 inches tall. If allowed to run around and make plays while scrambling, he can hurt you. The Bobcat game plan of keeping him in the tackle box, having a hand in his face and keeping his receivers covered downfield is a formula for success that Enterprise can follow.

Coach Brooks Burns will tell you himself that his Jackets are far from the fastest team in the area. However, Enterprise is very physical, especially on their offensive line. They can run the ball between the tackles with success and did so against Loyd Star in the first half of the Sting Bowl.

Hopefully the Yellow Jackets can contain Cosby and keep the game a low-scoring affair, which will be to their advantage.

The Panthers are the area team with the most regular season left to play, as they still have three games remaining on their schedule. This week they welcome Wingfield to King Field for homecoming.

The Panthers still will very likely make the playoffs, but their hopes for hosting a first-round game took a nose-dive last week with a 34-33 loss at Natchez.

With seven minutes left at Natchez, the Panthers held a 13-point lead, but the Bulldogs came storming back on the arm of senior quarterback Paul Hargrave. Hargrave threw three fourth-quarter touchdown passes in a furious rally that put his team up 34-27.

Brookhaven pulled within one point with a minute to go when quarterback Darius Robinson hit Dorian German with a touchdown pass. Robinson was drawing his first career start in place of Sevante Quinn.

Special teams have been an issue all season for the Panthers and trailing 34-33, they elected to go for the win with a two-point conversion try. The attempt failed, and Natchez was able to hold on for the one-point win.

The Cougars will wrap up their regular season and clinch a district title with a win against Amite County School Center on Friday in Liberty.

The Rebels won’t pose much of a problem for the Cougars, as their lone win this season was against Ben’s Ford and they’ve been blown out in the last two weeks by district opponents Clinton Christian and Centreville.

The AA playoffs begin next week, and with 18 teams in the classification, only two teams will be left out of the 16-team playoff. The playoffs will be seeded using power points and it appears the Cougars could be seeded somewhere around the fifth or sixth spot.

BA will find out their opponent after the results go final Friday night, but look for the Cougars to be hosting a playoff game next week on R.M. “Red” Stuard Field.

Wesson travels to Tylertown this Friday for a matchup with the Chiefs. Wesson had identical 4-7 records in their first two seasons under coach Jeremy Loy. A win over the Chiefs this week would get them win number five and would also be their first division win since joining Region 8-3A.

The Cobras are coming off a tough 21-12 loss to West Marion and Tylertown fell 20-14 at Seminary last Friday.

The Cougars got a closer-than-expected 35-28 overtime win against Purvis on Friday in Monticello.

This week Lawrence County travels to Leakesville to take on the always-gritty Greene County Wildcats.

The Cougars know they are going to the playoffs, but they want to keep their division record perfect ahead of a showdown in their regular season finale with defending region champs Poplarville.

The Co-Lin Wolves are also going to the playoffs after their 41-27 win over Hinds last week. Co-Lin travels to Jones on Saturday for a 2 p.m. kickoff with the Bobcats. Both teams are 4-0 in the MACJC South Division and the winner will likely host a first-round playoff game.