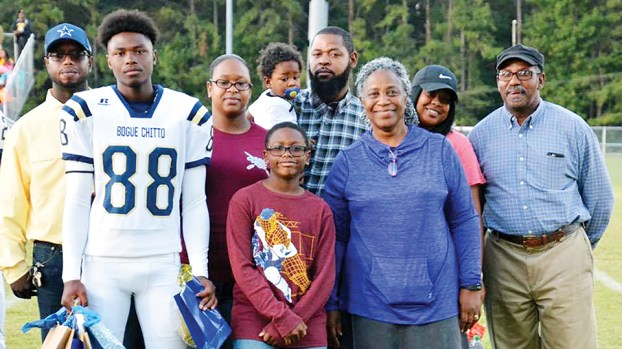 Photo by Stacy Leake Bogue Chitto senior defensive end Warrick Cook is surrounded by family prior to the Bobcats 49-8 victory over Amite County. Cook was one of 15 seniors to be honored in a pregame ceremony on Troy Smith Field and is averaging 10 tackles per game in 2018.

Tackling is name of the game for Cook

In the “game” against Amite County on Friday night Cook made nine tackles, including one sack, while also recovering a fumble in a 49-8 Bobcat victory. For that standout performance, he has been named The Daily Leader’s Defensive Player of the Week.

In the game within the game, Cook is worried about one thing and only one thing on every defensive play — did I get the tackle? It’s common to see Cook pop up from the bottom of a pile of Bobcats, smiling and taunting his teammates about another tackle that will go to his credit.

Against Amite County, the play of Cook was instrumental in shutting down what had been an extremely potent Trojan offense. Trojan quarterback Derick Cosby had thrown for a combined 600 yards in the previous two games, a win over West Lincoln and a loss to Loyd Star. Cosby never got comfortable against Bogue Chitto, as Cook and his defensive teammates harassed the quarterback on nearly every play.

“Our coaches had a good game plan of how we would cover their receivers,” said Cook. “For it to work, though, we were going to have to get pressure on their quarterback.”

One of two things happened on nearly every Trojan offensive play — either Cook got to Cosby and harassed the quarterback, or he got held by an offensive lineman grabbing his jersey.

On one play Cook was being held from behind as a Trojan offensive lineman had a handful of jersey at the same time Cook himself had grabbed hold of the back of Cosby’s jersey. It looked like a frustration sandwich for the Trojans with Cook in the middle. Cosby was able to weakly flick a pass out towards the flats as a grinning Cook pulled him down from behind.

Cook and his defensive teammates play the game to impress the fans and their coaches — Gareth Sartin, Chad Norton and Adam Moak. They also like to catch the eye of Steve Wallace as well. Wallace — the father-in-law of Sartin — keeps the defensive tackle tally sheet on the sideline. The stats are later confirmed and adjusted by Norton after watching film, but on Friday night it’s Wallace who is assigned with giving credit to a tackler on each play.

“You know I got there first,” a laughing Cook said to Wallace as he came off the field against Amite County.

Linebacker DaMarcus Godbolt also mentioned the rivalry for tackles earlier in the season when he won defensive player of the week himself.

“Me, Warrick Cook, Darius Porter, Steven Allen and Jermaine Black are always pushing each other to see who can get to the ball carrier first,” said Godbolt at the time. “It’s a competition between all of us to see who can get the tackle before our teammates.”

For Sartin, the success for Cook comes down to how hard his senior plays.

“Warrick has a good motor and goes hard on every down,” said Sartin. “He’s a guy who has really improved over the years and he’s made several big plays for us this year.”

Cook thinks the worst thing he can do as a defensive end is be predictable.

“I’m not the heaviest guy in the world so I can’t expect to use strength on every play,” said Cook. “Sometimes I use strength and sometimes I use speed. I’ll go inside and then I’ll go outside. A big part of what I do is to study the man trying to block me and attack where he might be weak.”

“It’s all been worth it,” said Cook. “All the hard work, all the practices, all the losses. We’ve stuck together as a team and as a class. We’ve encouraged each other to never give up and now we’re seeing that work pay off.”

Smith is in command of Hornets’ offense

Dane Smith has come a long way in the last two years as the starting quarterback for the Loyd Star... read more