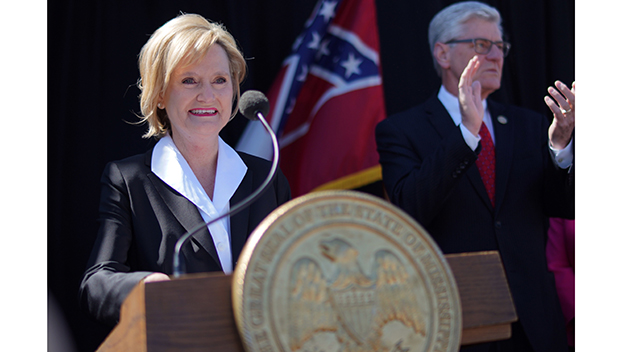 U.S. Sen. Cindy Hyde-Smith is embarking on a campaign bus tour of the state, opting to take her message to voters instead of debating her opponents.

“We are doing a bus tour … through the state. We’re taking our message to (voters) and they can come ask me any question that they want to ask me. I just think that’s more beneficial (than debating),” Hyde-Smith told Mississippi Today.

The Brookhaven republican has been unwilling to debate state Sen. Chris McDaniel, R-Ellisville, and former Democratic Congressman Mike Espy ahead of the Nov. 6 special election. Hyde-Smith previously said her busy schedule in the Senate prevented her scheduling a debate.

A video circulated by the McDaniel campaign earlier this week shows Hyde-Smith saying she didn’t want to debate because doing so would give McDaniel free publicity.

“Right now, my opponent does not have enough money to get on TV and my guys are saying that’s like handing him a $200,000 campaign donation because he’s way down in the polls,” she says in the video. “He’s wanting the TV time.”

“Obviously, Chris McDaniel is running out of time, running out of money and now he’s just trying to garner free publicity, but we are just not going to give him a platform to continue spouting lies about Sen. Cindy Hyde-Smith,” campaign spokeswoman Melissa Scallan told Mississippi Today.

Hyde-Smith’s bus tour is scheduled to stop in Brookhaven, but it’s unclear when.