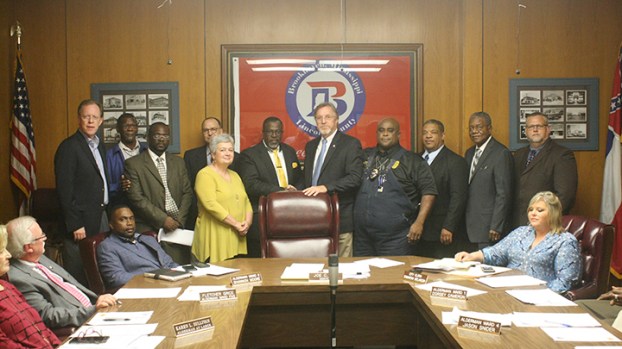 Brookhaven Mayor Joe Cox (center) is surrounded by local faith leaders following the unanimous passage of a resolution calling for the ban on the Forest Hill band program to be lifted.

The student members of the Forest Hill High School band should not be punished for an insensitive halftime show put in place by its director, the City of Brookhaven declared Tuesday night.

The Brookhaven Board of Aldermen quickly and unanimously passed a resolution calling on the Mississippi High School Activities Association to lift a one-year ban it imposed on the school’s band program for “inappropriate conduct” for a halftime show featuring band members pointing prop guns at other members reportedly dressed as law enforcement officers. The halftime show was performed on King Field at Brookhaven High School during a football game the week after two Brookhaven police officers were killed in the line of duty, leading MHSAA to investigate after outrage swept the community and state.

“The ruling of the MHSAA in suspending the students of the Forest Hill marching band from participation in school activities does, in my opinion, place undue punishment on students who do not share any culpability, as they were acting at the direction of their band director,” Cox said, reading from a prepared statement. “An extreme punishment levied on the band members for an adult decision is patently unfair to those students, as well as to their current and future interests.”

Cox called the performance of the halftime show an act of “bad judgment” by Forest Hill band director Demetri Jones, who has since been suspended by the Jackson Public School District, but claims on social media he’s been fired. Cox said Jones’ suspension was appropriate and that he was ultimately responsible for the content of the band’s halftime show.

But a one-year suspension of the entire band program would negatively affect the education of the band members and could cause them to miss out on band scholarship opportunities, Cox said.

“To that end, I intend to ask the board of aldermen of the City of Brookhaven to pass a resolution in support of contacting MHSAA to lift the suspension against the students of the Forest Hill High School band so that they may complete their music education without this blemish on their record,” he said.

The halftime show in question was performed in Brookhaven on Friday, Oct. 5 following a week in which all of Brookhaven’s attention was focused on the funerals of BPD officers Zach Moak and James White, who were murdered while responding to a call of “shots fired” on North Sixth Street in Brookhaven before 5 a.m. Saturday, Sept. 29.

The city’s call for mercy toward Forest Hill Tuesday came at the same time a standing room-only crowd of parents and Forest Hill band students packed a meeting of the Jackson Public Schools Board of Trustees, carrying signs and cheering for the reinstatement of Jones and the band program — band members even snapped to attention and recited the band’s creed.

JPS Superintendent Dr. Errick Greene announced Tuesday the district would appeal the band’s suspension to MHSAA, though at the meeting he stuck by the board’s “personnel decision” regarding Jones, saying the halftime show placed students in danger.

The suspension of Jones and the Forest Hill band followed a week of public outcry, led partly in Brookhaven by Cox.

The morning after the halftime show, Cox released a lengthy statement on social media in which he called the Forest Hill halftime show “a horrific display of disrespect” toward Brookhaven.

“It in no way sent the message of ‘put down the guns and pray,’ as many outside our community have attempted to depict through their individual loose interpretation of the ‘John Q’ movie in order to justify the band’s routine,” he said two weeks ago.

Cox went on to state he would be contacting Gov. Phil Bryant, legislators, the Mississippi Department of Education, MHSAA, the Mississippi Department of Public Safety and others to ask for a “state level select committee or the appropriate state agencies” to investigate the band’s performance, calling for any JPS staff, faculty or administrators with prior knowledge of the halftime show to be terminated.

Online comments laden with racial slurs and calls for public hangings followed the outcry in Brookhaven. Copiah-Lincoln Community College announced it was investigating the social media comments of an employee who allegedly used a racial obscenity. As of Wednesday, the college has given no update on the investigation.

In Brookhaven Tuesday night, Cox was surrounded by several community pastors as he called for grace for Forest Hill band students.

“Those comments — it got out of hand,” he said. “It was an unfair assessment of the situation. People tried to turn this into something it was not. This was not a racial issue.”

Brookhaven Police Chief Kenneth Collins backed up Cox in the board room, saying the incident was not the fault of Forest Hill students and that they shouldn’t be punished for an adult’s decision.

“We want the parents in Jackson to know we want the same bright future for their children as we want for our children,” Collins said. “We want the world to know God still lives. Hate and racism is like a hungry lion — it’s lurking, and it’s waiting to devour all it can. But we’re God’s warriors, and that lion better run.”