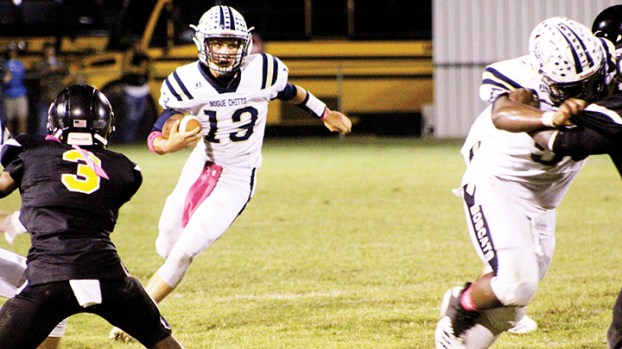 Photo by Cliff Furr/Bogue Chitto quarterback Shaw King cuts towards a hole behind a Zach Upkins block against Amite County. King put up 218 yards of total offense and three touchdowns in the 49-8 victory over Amite County.

Some will take Calvary Drive while others will travel Bogue Chitto Road before hitting Jackson-Liberty. Regardless of how they get there Friday night, expect a large contingent of Bogue Chitto fans to make the trek to Flea Hop for a 7 p.m. showdown between the visiting Bobcats (4-5) and the home-standing West Lincoln Bears (3-5).

The Bears are coming off a bye week and last played two weeks ago in a 40-22 win over Enterprise. Bogue Chitto juiced up the matchup with their 49-8 pounding of Amite County last week. The teams are tied with identical 1-1 records, as West Lincoln closes their season with Loyd Star next week while Bogue Chitto plays Enterprise.

The Bogue Chitto offense has been on a tear since picking up their first win of the season against Mount Olive. The Bobcats are averaging 39 points per game in the last six games and are 4-2 over that stretch.

The Cats spread the ball out via an offense that is big on misdirection and fakes. Quarterback Shaw King looks for Brandon Lewis, Malik Richarson, Zach Upkins and Bryce Langley through the air. King is also a capable runner when not handing off to DaMarcus Godlbolt, Jermaine Black or Owen Anderson. Anderson — a sophomore — is now the leading rusher after gaining 544 yards on the ground thus far in 2018.

Godbolt and Black are leaders on the Bobcat defense from the linebacker position. Warrick Cook — the reigning Daily Leader Defensive Player of the Week — is an anchor at defensive end. The Bogue Chitto secondary — which features Lewis, Upkins and J.T. McCaffrey — was solid in pass defense against Amite County.

Don’t expect the Bears to test the Bobcat secondary, as West Lincoln will look to do their damage on the ground. The duo of Michael Brothern and Enrico Price is the engine that drives the West Lincoln offense.

The West Lincoln defense counts on Cam Buckles and Tate Smith to lead them in tackles. Brothern is also a top defender as a safety.

West Lincoln is physical on both sides of the line, and that must be where they win the game according to their coach.

“We’ve got to win it up front,” said West Lincoln coach B.J. Smithhart.

As often the case in high school football, special teams could end up being the difference in the game. Expect both teams to go for two-point conversions more than they attempt point-after kicks.

Panther Park and King Field should be filled to the brim Friday night, as the Brookhaven High Panthers (5-3) welcome... read more