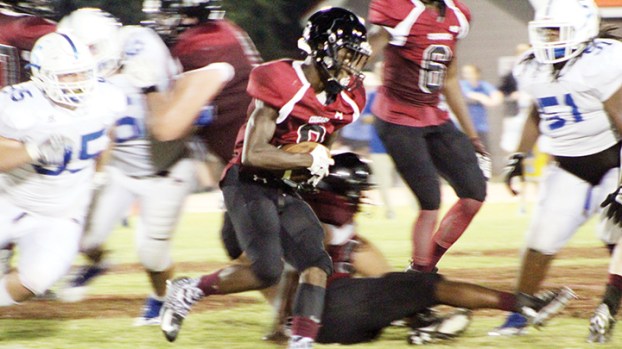 Photo by Cliff Furr/Lawrence County junior running back Kylan Cooper hunts a crease against the Sumrall defense. Cooper has a team leading 1,055 rushing yards in 2018.

The Cougars — who have an unblemished division record — travel Friday night to Leakesville for a 7 p.m. matchup with the Greene County Wildcats (6-3).

The Wildcats were district runners-up in 2017 and finished with an 11-2 record. They beat the Cougars 46-20 under then first-year head coach Michael King. It was an impressive turnaround for a school that had won a combined six games in the previous three seasons.

Junior quarterback Jacob Mitchell is 152-of-226 this season for 1,497 yards. Mitchell has tossed 15 touchdowns against three interceptions. He also spreads the ball well among his receiving corps, as there are five different receivers who have caught touchdowns for the Wildcats in 2018.

“They have one of the best defenses in 4A,” said Anderson. “They are very big and very physical.”

The most points the Wildcats have surrendered all year are the 31 points scored by Poplarville in Greene County’s only region loss. The Wildcats have two shutouts and three other games where they have held their opponents to 14 points or less.

A win Friday night would assure the Cougars of finishing in the top two of the region and lock up a home playoff game in the first round. Lawrence County finishes their regular season next week at Poplarville.

The Wesson Cobras (4-4) will look to break a three-game losing streak Friday night when they travel to Walthall County... read more