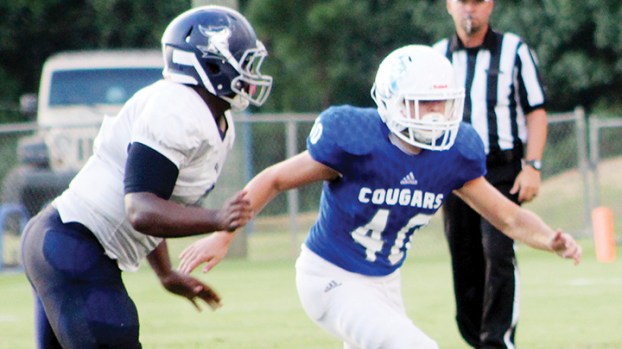 Brister first man to the ball for Cougars’ defense

Gunar Brister has been the man in the middle of the Brookhaven Academy defense all season long. As a middle linebacker Brister is responsible for making the calls and assuring his teammates they are in the correct position before the ball is snapped.

On Friday night in a 35-14 win over Amite School Center Brister was a man of action for his team as he recorded 15 tackles in the win. For that performance he has been named The Daily Leader Defensive Player of the Week.

Brister said the Rebel offense was game-planning to wear the Cougar defense down.

“They used a lot of short runs in the first half and played possession football,” said Brister. “They were trying to keep our offense off the field.”

Brister gives credit to his defensive line for allowing him to be in the middle of the action.

“Our line did a great job of keeping their blockers off of me and I was able to get to the ball carrier all night,” said Brister.

Brister and his teammates are the first team in the area to enter into the postseason as the Cougars host the Marshall Academy Patriots Friday night in the opening round of the MAIS AA State Playoffs.

The Cougars are locked in and focused according to their junior linebacker.

“Practice has been great so far this week,” said Brister. “Everybody is focused on doing their job and playing together as a team on Friday night. I feel like we’re playing some of our best football of the year right now.”

Friday night wasn’t the first big game Brister had had all season. He made 13 tackles in a win over North Delta and 13 stops in a win over Ben’s Ford Christian.

Brister is part of an athletic linebacking corps for the Cougars that includes Collin Waldrop, Cole Griffin and Nick Ogden.

As with most linebackers, Brister loves the physicality of the game.

“I love getting to hit people,” said Brister. “It’s an awesome feeling to be the first man to the ball carrier and to take them down. That’s the best part about playing linebacker.”

In his first season at Brookhaven Academy, Brister hopes the season will see his team playing for a championship in the middle of November.

“I have seen us grow as a team and defensive unit this season,” said Brister. “I think if we can listen to our coaches and execute the game plan they lay out for us, we’ve got a chance to make a run in the playoffs.”