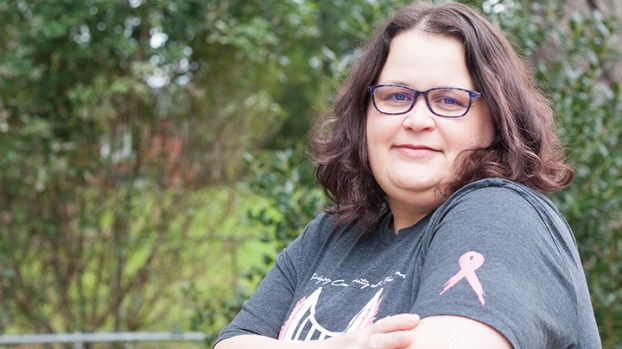 She had done her homework.

She had researched and read and looked at photographs and charts and medical journals, had looked up the keywords and diagnoses and treatments and medicines and therapies. She was ready to face anything, and when her doctor pinned the mammogram photo up on the lighted board to show the dark mass growing in her breast, Melanie Purvis Moak knew.

“I was the calmest person I knew, because I was prepared for the worst,” she said. “When the doctor called to tell me, I was so certain, so nonchalant, my husband and my son were watching a movie, ‘Planet of the Apes,’ and I let them finish watching it before I told them.”

The call came in July 2014 following a season of illness Moak couldn’t quite get over, a continual bad feeling that ultimately led to a mammogram she didn’t want and didn’t think she needed. She put her breast in the machine and submitted to the test at 42 after her doctor cajoled her — shamed her, almost — into the procedure.

“I wasn’t planning on having a mammogram until I was 45. When we got the results, my doctor said, ‘you wouldn’t have made it to 45,’” Moak said. “I believe it was divine intervention.”

God’s insistence saved Moak’s life, but not before a journey that involved a lumpectomy, 35 radiation treatments, six rounds of chemotherapy and numerous IV drips and drugs to combat fatigue, nausea and a host of sicknesses that come from killing cancer with poison. Being one of the 13 percent of American women who will have breast cancer took her to the lowest points of her life.

“When I hear the word ‘survivor,’ I always think of courage, or strength. I never considered myself a strong person before, but God got me through it, and I feel like a strong person now,” Moak said. “I feel like I fought the good fight.”

The good fight started in the summer of 2014, at a point in her life when Moak had no time for cancer. She was commuting to Jackson every day to work and spent her spare time blowing up Facebook with photos of her new grandbaby.

But she was sick all the time. She had mono three times that year, felt fatigued all the time, and with a fourth case of illness coming on she began to wonder what was wrong with her body. Her doctor thought she may be having hormonal fluctuations, but would not prescribe a hormone-based treatment without a mammogram.

“When I finally said, ‘yes,’ I thought to myself, ‘did I just agree to this?’” Moak said. “I had no family history, and a mammogram was something I felt like I didn’t need to do.”

Moak, who calls herself “a chronic researcher,” began studying cancer as soon as she saw the word ‘suspicious.” She was ready when the biopsy came back.

She had breast cancer, a rare and aggressive triple-positive form of the disease with an increased number of receptors that feed its growth. In this case, the cancer was estrogen receptor positive, progesterone receptor positive and HER2 gene positive.

The hormone treatments Moak was hoping to receive before her mammogram would have dangerously fertilized the cancer. So far, all her testing had been done in Brookhaven. After the diagnosis, she was placed under the care of Dr. Barbara Kraft, an oncologist with the University of Mississippi Medical Center.

The cancer, though aggressive, was found early, so Moak had some options. She had always told herself the breasts would come off with a mastectomy if she ever faced the decision, but the prognosis for a lumpectomy carried only 10 percent more risk, so she took the gamble. Doctors cut out the mass in August 2014.

Up until then, Moak had faced cancer with grit.

“I went into this with an oh-no-you-didn’t mentality,” she said. “I was more mad than anything else. I was ready to fight. I had it in my mind I was going to be Stage 1, have surgery and radiation, and be good. I had put chemo out of the picture.

“When the doctor finally said, ‘chemo,’ I had to finally cry,” Moak continued. “That was scary. Everyone knows what chemo does to your body. It’s poison. When I heard the word ‘chemo,’ I knew it was real.”

Over the coming weeks, Moak would undergo 18 injections in six separate rounds. She continued working and making the commute to Jackson every day — her employer was very accommodating, she said — but she said she wouldn’t do it again, and wouldn’t recommend it to anyone else.

Moak started chemotherapy in October 2014, and as the drugs circulated through her body, her body tried to quit. Her hair fell out — her older daughter, Chanie Vines, shaved her head in support. She developed skin problems and “raw mouth” made all food tasteless and bland. Instead of wasting away, Moak gained 40 pounds on chemo, as she could only taste, or tolerate, rich foods.

The drugs also gave her severe acid reflux, constant upset stomach and crippling fatigue. During her sixth and final round, Moak had a bad reaction to the chemo and could barely get out of bed for two weeks. Her husband of 30 years, Chad Moak, had to push her around Walmart in a wheelchair. She didn’t have the energy to walk.

“She had the will, she just didn’t have the power,” Chad said. “Trying to make her get in the wheelchair was a task, too — it made her feel bad, but it’s just one of those things that had to happen.”

Chad, a 47-year-old worker for Ferrellgas, said the feeling of powerlessness in the face of cancer was, for him, the hardest part of his wife’s ordeal. He pitched in when she was unable — cooking supper, buying groceries, taking care of the children — but the real downer for Melanie wasn’t that work needed doing, it was that she couldn’t do it herself.

“The main thing is you have to make them feel like they’re still appreciated, like they have a purpose. If they don’t have a purpose, they’re not gonna make it through,” Chad said. “I told her, every day, she’s the best looking woman in the world. With her sitting there, bald-headed as I am, and I’m telling her this. You have to hold up that spouse, let them know you love them, forget about yourself and think about them.”

Coming back to life

Six weeks after her final treatment, Moak said she began to believe life may return to normal. It took a series of little victories — one day she’d be able to sit up in the living room for an hour or so. Another day, she went outside for the first time in days. Then, she managed to walk down the driveway.

Her doctor wouldn’t declare the fight over until another battery of tests were complete, but Moak felt hopeful after a post-chemo pet scan turned up negative.

“But you, slowly, eventually, come back,” she said. “I thought to myself, ‘I’m good. I’m in the 20th mile of this marathon. I can see light at the end of this tunnel.’”

Moak was declared cancer-free in October 2015, 14 months after the mass in her breast was first detected. In the following years, she was able to drop the other followup medications and now she sees the oncologist twice per year. The rate will drop to once per year in 2019.

Moak is back in Brookhaven, working as a revenue supervisor with Brookhaven Health and Wellness. Her hair is long and black. She volunteers with the Brookhaven Animal Rescue League and walks in the annual Relay for Life.

You can make it

And now that she’s a survivor, she seeks out other women starting the fight she fought four years ago. She looks for them on social media, and people who know her call her in to speak to other women who have been diagnosed with breast cancer. She offers advice, encouragement, brings them meals and tries to give them the courage to do battle.

There are plenty of women who need to hear her words. The Mississippi State Department of Health estimates more than 2,300 of the nation’s 266,000 annual cases of breast cancer occur in Mississippi women, though numbers have been declining since the early 90s, likely due to decreases in the use of hormone replacement therapy and increased awareness from events like October’s Breast Cancer Awareness Month.

“People automatically think, when they hear someone has cancer, that it’s a death sentence. But people need to realize, you can make it,” Moak said. “I’m not any different than anybody else. You just have to believe. You’ll be better and stronger after the ‘marathon’ is over. There will be days you don’t think you can go on. There will be days when you realize you will never be the old you. You will be different in so many ways on the other side, and many of them will be for the better. Life on the other side is sweeter and more precious.”

Moak urged women turning 40 to give themselves a special birthday present — a mammogram.

Doctor: The best prevention for breast cancer is early detection