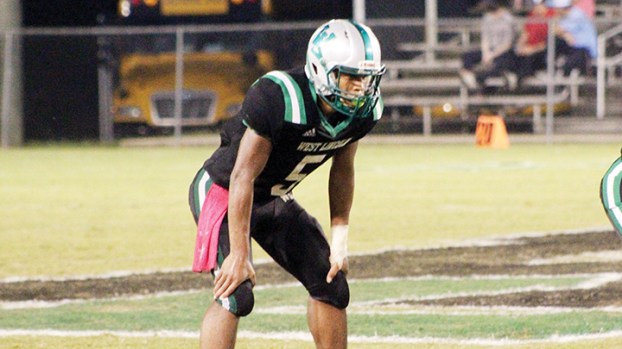 Photo by Cliff Furr West Lincoln freshman running back Enrico Price rushed for 138 yards and two scores and also passed for a touchdown last week in a 55-30 loss to Bogue Chitto. Price is the first Lincoln County ball carrier to top 1,000 yards rushing in 2018.

When you watch him run and you see the combination of vision and speed, it’s hard to believe that Enrico Price is only a freshman.

Price did a little bit of everything for the West Lincoln Bears Friday night in their 55-30 loss to Bogue Chitto. A running back, Price rushed 18 times for 137 yards and two touchdowns. He also passed the ball once for 38 yards and another score. For his standout performance Price has been named The Daily Leader Offensive Player of the Week.

Price says he gets motivation from chasing a cousin who was the first running back in West Lincoln history to post big gains.

“My cousin Stacy Fells Jr. holds the school rushing record and I’d like to top that,” said Price.

Price caught the football bug as a fifth-grader when he realized that outrunning defenders for touchdowns came natural to him.

One could say it’s in his genes. Not only does Price have Fells in his family tree, he also lines up beside another talented running back at West Lincoln in Michael Brothern, who just happens to be his brother.

Brothern has been the leading rusher for West Lincoln most of the season, and has rushed for 954 yards and 12 touchdowns of his own.

Price, who is called “Red” by his friends and family, says that having his brother in the backfield with him isn’t something that he takes for granted.

“We look out for each other and keep each other motivated, in the games and off the field,” said Price. “He knows I’ve always got his back and I know he’s always got mine.”

Price is the son of Enrico Price Sr. and Tambria Brothern.

The halfback pass that Price tossed against Bogue Chitto went for a touchdown to Chris Freeman. Price says it’s the fourth time they’ve run the play this season, but the first time it’s worked.

“I saw the line rushing towards me and knew that Chris would be open. I just threw it up and let him run under it,” said Price.

Price has become a stronger runner as his freshman season has progressed. The thing that appears to have improved for him the most over the course of the season is his patience at letting the hole develop.

Price and Brothern run behind a physical offensive line that is chock full of fellow underclassmen.

As young as he is, Price doesn’t really think too much about the distant future. Right now, he’s focused on improving every game and growing up as an athlete and a student.

“I’d like to play football for a long time,” said Price. “I’ve got a lot of football left to play, but I know there is more to school than just playing ball.”

Brister first man to the ball for Cougars’ defense

Gunar Brister has been the man in the middle of the Brookhaven Academy defense all season long. As a middle... read more