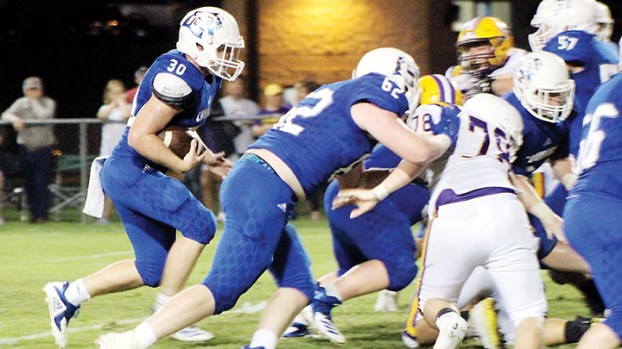 Photo by Cliff Furr Brookhaven Academy junior running back Nick Ogden looks for space at the line of scrimmage against Centreville. Ogden rushed 14 times for 157 yards and two touchdowns in a 35-14 win over Amite School Center last week.

Cougars host Marshall in first round of playoffs

The Brookhaven Academy Cougars (7-2) host the Marshall Patriots (3-7) out of Holly Springs on Friday in a MAIS AA State Playoffs first-round matchup.

The Cougars are coming off of a 35-14 win over Amite School Center that sewed up the District 4-AA title for BA.

The Cougars are seeded fourth in the 16-team playoff bracket and the Patriots are the 13th seed. Brookhaven Academy coach Ron Rushing advised fans not to be fooled by the Patriot’s record — they are still a good football team.

“They’ve had as many as 5-6 starters out throughout the season due to injuries,” said Rushing. “They’ve been banged up and they’ve also played a tough schedule.”

The Patriots are traditionally a strong team and often make a deep run in the playoffs. Brookhaven Academy defeated Marshall in 2012 in the AA state championship game. The last losing season for the Patriots was when they posted a 5-6 record in 2006.

“They’ve got athletes at every position,” said Rushing. “They run the ball well and use a lot of different formations to get the matchups they want.”

It was the BA ground game that powered them to the win over Amite School Center, as junior Nick Ogden rushed for 157 yards and two scores on 14 carries. Ogden averaged more than 11 yards per carry and had a long run of 43 yards.

Cougar quarterback Dawson Flowers didn’t have to do much through the air, as he finished 3-of-6 for 101 yards, one touchdown and one interception.

Collin Waldrop caught one pass for a 44-yard touchdown. Cade Brown had one grab for 33 yards and Cole Griffin had one catch for 24 yards.

Brown scored on an 81-yard kickoff return against ASC and Flowers returned an interception 41 yards for a score.

The Daily Leader Defensive Player of the Week — Gunar Brister — made team-high 15 tackles for the Cougars, including two for a loss. Griffin had nine tackles, and Keegan Smith and Harrison Brownlee made seven tackles apiece. Smith grabbed an interception and Cade Watson caused a fumble on defense.

The only common opponent for Marshall and BA is North Delta, who the Cougars beat 21-13 in the second week of the season. North Delta was a 40-20 winner over Marshall two weeks ago. The Patriots last tasted victory on Sept. 7 when they beat Kirk Academy 34-14.

The winner of the BA and Marshall matchup will play the winner of River Oaks and Greenville Christian.

The volatility of the seeded bracket was on full display in 2017, when both the fourth and fifth seeds lost their opening-round games. St. Joseph-Greenville — the six seed — won the state title last season with a win over the eight seed, Tri-County.

Kickoff for the Cougars and Patriots is scheduled for 7 p.m. Friday night on R.M. “Red” Stuard Field.

Wesson headed back down to 2A district

Christmas came early for the Wesson Cobras on Tuesday when the MHSAA released classification numbers for the next round of... read more