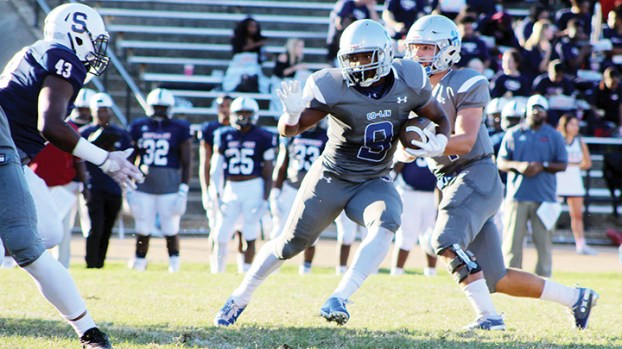 Photo by Cliff Furr/Co-Lin sophomore running back Deion Dampier takes a handoff from quarterback Hayden Davis on Saturday against Southwest. Dampier would later score from the one-yard line on the same drive.

The No. 17 Copiah-Lincoln Wolves (6-3) got more fight than they bargained for from the Southwest Mississippi Bears (1-8) on Saturday, but a strong fourth quarter by the home team pushed Co-Lin to a 31-17 homecoming victory.

The first quarter was a nightmare for the Wolves, as Southwest jumped to a 14-3 lead. Co-Lin had gone up 3-0 after a 40-yard field goal by Ashton Garner with 7:09 remaining in the first quarter.

Southwest responded with two long touchdown drives to take the lead. The first Bear touchdown came on the drive following the Co-Lin field goal. A five-yard touchdown pass from quarterback Da’Bryan Magee to running back Damarcus Mitchell put the Bears up 7-3.

The Bears would go up two scores with 13:30 left in the second quarter when Magee ran in for a short touchdown that capped a 97-yard drive. The drive was highlighted by a 65-yard pass from Magee to running back Gerkithis McCray. The PAT was good and Co-Lin trailed 14-3 on a sun-kissed day in front of a large Stone Stadium crowd.

The Bears are under the leadership of first-year head coach Tim Stowers. Stowers was hired in April to replace Cameron Achord. Achord had been hired to replace Tucker Peavey, but resigned after two weeks to take a job with the New England Patriots.

The triple option can be difficult for teams to defend, especially when most defenses are geared to slow down spread offenses.

Southwest has struggled at times offensively this season. Last week, they were shutout at Itawamba and the Bears have only scored more than 21 points three times in 2018.

On Saturday, however, Magee gave the Wolves fits with his ability to throw to running backs out of the backfield and routes to tight ends after the defense has been sucked in by repeated running plays.

After the Bears went up 14-3, they kept hot by recovering the kickoff following the score with a perfectly-placed pooch kick.

Southwest was driving again and looking for their third score of the game after the kickoff recovery when Co-Lin defensive back Natrone Brooks picked off Magee on the Wolves’ 4-yard line.

It took Co-Lin just over four minutes to drive 96 yards after the Brooks interception to get their first touchdown of the game when Deion Dampier scored from four yards out. That made it a 14-10 game which would hold for a halftime score.

Dampier scored again on the opening drive of the second half from the 1-yard line to put the Wolves up 17-14. Southwest would come back to tie it 17-17 with 4:42 remaining in the third quarter when Brazos Webb hit a 36-yard field goal.

The Co-Lin offense is at its best when quarterback Hayden Davis is dispensing the ball to his talented crew of wide receivers. Davis didn’t have a chance to get the downfield passing game going until the fourth quarter due to a strong Bear pass rush.

Tied 17-17 with 7:12 remaining in the game, Davis shook off the frustrations of the first three quarters with a 40-yard strike to Kundarious Taylor that put Co-Lin up 24-17. The final score of the game was set up by another Davis throw, this one for 24-yards to Trent Tyre. Tyre was taken down at the 1-yard line and, on the next play, Rico Owens plunged in to put the Wolves up 31-14.

Co-Lin head coach Glenn Davis credited the Bears for keeping his team on their heels through the first three quarters.

“Their offense is going to try to limit your possessions and they did a good job of that,” said Davis. “We rely on explosive plays and it took us a while to get that going today. We played slow to start the game and I didn’t think we played hard enough and that’s something we’ve hung our hat on all year, how hard we play.”

The focus for Co-Lin now turns to a 2 p.m. playoff matchup on Saturday with No. 1 East Mississippi. The Wolves have beaten the Lions in Scooba before in the MACJC playoffs. In 2012 they beat the defending national champion Lions 47-46 on a last-second 90-yard kickoff return by Joe Craig Jr.

“They’re the No. 1 team in the country for a reason,” said Davis. “We’ll work this week to prepare and then go give them our best shot.”

West Lincoln (3-7) had their chances in the second half of a close game with Loyd Star (7-3) on Friday... read more