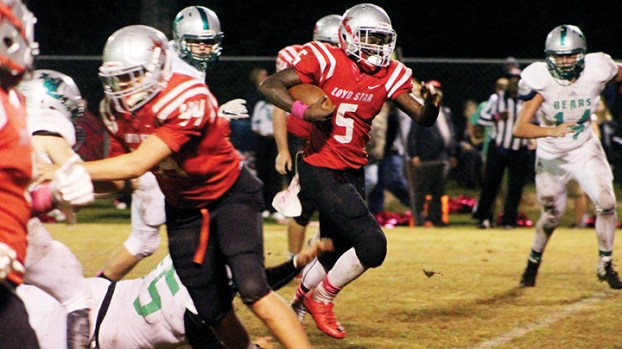 Photo by Cliff Furr Loyd Star sophomore running back Eric Birch breaks through the West Lincoln defense towards the end zone on Friday night. Birch ran for four scores in a 36-16 Hornet victory.

No kidding, it’s playoff time in a 2018 high school football season that feels like it has just begun.

Area fans will get a chance to see three home playoff games this weekend, as the second round of the MAIS playoffs gets underway while the MHSAA playoffs are in the first round for 2A, 3A and 4A schools. 1A, 5A and 6A schools in the MHSAA are finishing up their regular seasons this week.

Stylistically, the two teams are similar in their strengths. Both have talented running backs and physical offensive lines. Just as against Bogue Chitto in the previous week, the Bears were in a nip-and-tuck game until late in the second half. Two fruitless drives at midfield were all the Hornets needed to seize the lead on a night where they got four rushing touchdowns by sophomore Eric Birch.

Loyd Star will host the Mize Bulldogs (3-8) this week on W.E. “Sambo” Smith Field. The game will be the first playoff game hosted by the Hornets since Nov. 6, 2009. On that night, Loyd Star and then-coach Ryan Ross defeated Enterprise-Clarke 41-27.

It was Nov. 15, 2013 the last time Bogue Chitto (6-5) hosted a playoff game on Troy Smith Field. Bogue Chitto lost 37-34 to eventual 1A state champions French Camp in that game. The Bobcats welcome the Madison-St. Joseph Bruins (5-6) to Bogue Chitto this Friday for a 2A opening-round game.

Bogue Chitto ended their regular season with a 53-22 win over Enterprise last week. It was the sixth game this season the Bobcats have topped the 40-point mark and the second straight they’ve gone over 50 points.

Coach Ron Rushing and his Brookhaven Academy Cougars (8-2) are preparing to host the River Oaks Mustangs (6-4) out of Monroe, Louisiana on Friday. River Oaks has been a member of the MAIS since the dissolution of the Louisiana Independent School Association (LISA) in the early 90s.

The Mustangs are the No. 5 seed in the AA playoff bracket, but have not won a game over a team with a winning record this season. The winner of the BA game will take on the winner of the Greenville-St. Joseph versus Clinton Christian game.

Lawrence County and West Lincoln both travel to Rankin County

The Lawrence County Cougars (7-4) play in a meat grinder of a division in Region 7-4A. The Cougars finished third in the division after losing 48-14 to the region champion Poplarville Hornets last week.

It’s been an impressive turnaround for first-year coach Jesse Anderson. Last season, the Cougars didn’t win a region game. This week, they’ll travel to Rankin County for a matchup with the Florence Eagles (4-7).

Florence captured second place in their division with a 51-26 victory over Lanier last week. The Cougars and Eagles were once region foes and last met in 2016 when Florence topped Lawrence County 17-6.

The winner of the Lawrence County game plays the winner of West Lauderdale and Vancleave.

The West Lincoln Bears (3-7) are also headed for Rankin County on Friday night when they take on the Pelahatchie Chiefs (10-1). It’s a regular-season rematch from Sept. 7 when the Chiefs beat the Bears 56-0 in Flea Hop.

The Chiefs lost to Mobile Christian (Alabama) in the second week of the season and have not been beaten since. The closest anyone has come to beating them this season was a 21-19 win over Scott Central.

The pair will renew the rivalry on Friday when the Mustangs come to King Field to take on the Panthers. BHS has won three in a row in the series.

The Mustangs lost their season opener 10-6 to Wayne County. West Jones then won five games in a row before losing 23-17 to Laurel on the road in overtime.

The Panthers could vault from fourth place in the region to second with a win over the Mustangs on Friday night. It will be senior night for a talented group of players who have been vital to the success of BHS over the last few seasons.