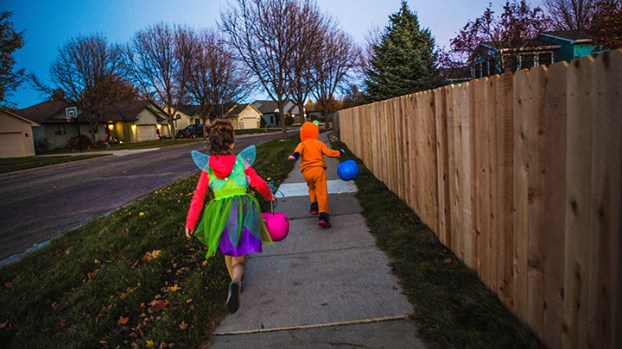 The treats could get soggy Wednesday if Mother Nature plays her tricks.

But then again, the weather could cooperate and keep Halloween dry, said meteorologist Thomas Winesett with the National Weather Service in Jackson.

Weather experts are predicting a 30 to 40 percent chance of isolated showers in the late afternoon to early evening Wednesday in anticipation of a cold front that will bring a line of heavy rains through the area. The bad stuff won’t hit until after midnight though, he said.

That means it may not rain on the trick-or-treaters’ parade from door to door or at events planned in Brookhaven, Wesson and Monticello.

“It looks like the worst of it should hold off until after those events,” Winesett said.

While precipitation is expected, Winesett could not say what areas would be spared rainfall.

“Take an umbrella and be ready,” he said. “It’s not going to be a complete washout the whole evening. Not everyone’s going to see rain. It could rain on one side of town and not the other.”

The Brookhaven Police Department will have the South Jackson Street area closed from 5:30 to 9 p.m. for trick-or-treating.

Parking will be available at Brookhaven Elementary School, the lot at Chickasaw and Jackson, the downtown parking lots, and in any legal parking along area streets not closed.

Wesson’s Play It Up volunteer organization will be hosting tent-or-treating in City Park from 6-8 p.m.

This is the second year for the event, which drew 700 to 1,000 people in an unofficial count, said Town Clerk Angela Hester.

Those who want to participate should call Town Hall at 601-643-5221 to register and get information. A tent is not mandatory. Play It Up is looking for groups, churches, businesses or individuals to host a spot as well as donations of candy for games and activities that are planned for the kids.

Refreshments will be available at no charge. If it looks like thunderstorms, the event will be moved to the Old Wesson School.

Monticello is offering a rerun of last year’s trunk-or-treat event in the downtown area on Broad Street from 5:30 to 7 p.m., said Mayor Martha Watts.

Local churches and businesses will be participating to decorate trunks of vehicles and give out treats to the children. Tickets will be available at the entrances that can be redeemed for a free meal — hot dog, chips and a  bottle of water.

More than 1,500 people attended the celebration last year, she said.

In Monticello, door-to-door trick-or-treating is 5-7 p.m.

While some churches celebrated over the weekend with fall festivals and trunk-or-treating, others are hosting events Wednesday and even later.

First Baptist Church of Brookhaven is holding trunk-or-treat festivities from 5:30 to 7 p.m. Wednesday and it’s free to the public, said Carrie Sones.

Family-friendly costumes are encouraged at the church-sponsored event, which is aimed at children up to sixth grade.

Sones said the event will be moved into the church gym in case of rain.

Inflatables will be set up for the children and games coincide with stories from the Bible. A Gospel booth features a tunnel that takes visitors through the plan of salvation.

Church of the Way at Brookhaven at 504 West Congress St. will host its festival from 6-8 p.m. Wednesday as well. Games, inflatables and food are expected.

The Assembly at 226 N. Second Street is planning Blessing Street from 5:30-7:30 p.m. It’s a door-to-door activity in a safe environment with games as well.

The fun begins at Southway at 1107 South Jackson St. at 4 p.m  with hamburgers, hot dogs and boiled peanuts.

Friendship Baptist will host its event from 5-7 p.m. at 1502 Friendship Lane. There will be food, game and prizes as well as a chili cookoff.

Candy will be sent to Operation Gratitude and included in care packages sent to the armed forces.