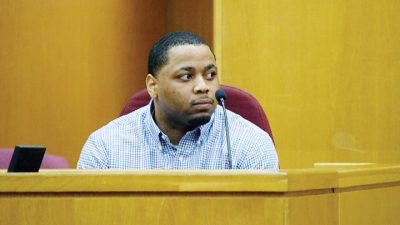 A Brookhaven man will spend the next three decades behind bars for his role in a fatal shooting three years ago.

Cordarryl Bell, who was found guilty of manslaughter and aggravated assault in the Nov. 2, 2015, shooting death of 26-year-old Aquarius Nelson, was sentenced Tuesday by Lincoln County Circuit Judge Michael Taylor to serve 30 years in state prison and five years of post-release supervision upon his release. Assistant district attorney Brendon Adams said prosecutors are pleased with the trial’s results.

“We are happy that Mr. Bell will be held accountable for his actions, and I just hope this will help bring some closure for the victim’s family,” he said.

A Lincoln County jury found Bell guilty of manslaughter after three hours of deliberations on Sept. 28, at the conclusion of his second trial. The first, a three-day proceeding that took place in April, ended in a hung jury.

Bell was sentenced to 20 years in prison on the manslaughter charge, and 20 years with 10 suspended on the aggravated assault charge. The assault charge was levied against him for firing shots at the vehicle that drove Nelson to the scene of the shooting at a home at 115 Walnut St. in Brookhaven.

Bell’s attorney argued self-defense, saying Bell met Nelson at the door of the home that day and opened fire to protect himself from being killed by Nelson. Bell testified Nelson and Lattrick Williams — who was arrested on drug warrants in McComb by a local, state and federal law enforcement task force earlier in October — were out to kill him for shooting Christopher Stringer the previous day. Bell claimed he never shot Stringer, and that Williams fired a shot at him earlier on Nov. 2.

Prosecutors pointed out no weapons were found on Nelson or in the white Chrysler 300 that ferried him to the shooting and on to King’s Daughters Medical Center, where he was pronounced dead. They also used forensic evidence to convince jurors the fatal shots that entered Nelson were fired into his back as he ran from Bell, a posture not consistent with Bell’s claim of self-defense.

Best of Best inside Wednesday’s edition

You voted. We listened. The 2018 Daily Leader Reader’s Choice Award winners were chosen by readers who voted using a... read more