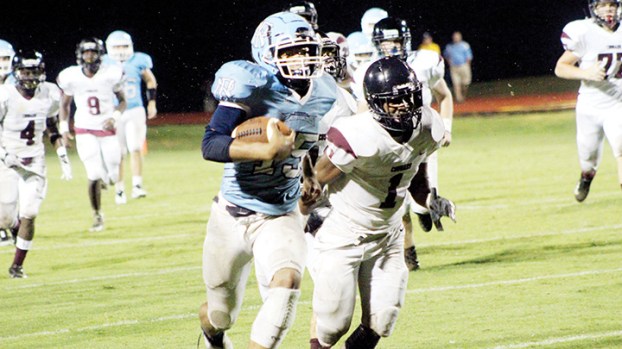 Lawrence County invades Florence for 1st round showdown of playoffs

The Lawrence County Cougars return to the playoffs after a one-year absence on Friday night when they travel to Florence to take on the homestanding Eagles in the opening round of the MHSAA 4A State Playoffs.

Florence is under the leadership of Steve Pruett, who is in his 10th season as the head coach. Pruett — who moved to Florence from McLaurin — steered the Eagles to new heights in 2016 when they reached the south state championship game.

This season the Eagles started the year off with four straight losses before pulling an upset in week five to beat an always-solid Forest team. In division play, the Eagles were beaten by McComb 40-35 and South Pike 62-21 in consecutive weeks.

McComb, Lanier and Florence were all tied with a 3-2 record in the division, but the Eagles vaulted into second place with a 51-26 win over Lanier in the final week of the season.

Junior quarterback Ian Vaughn is the engine that drives the Eagles, as he’s thrown for 2,169 yards by going 156-of-229 for 15 touchdowns and three interceptions. Vaughn has also rushed for 800 yards and eight touchdowns. He’s not the only threat on the ground for the Eagles, as senior running back Degerrick Lee has rushed for 1,420 yards and 18 scores in 2018.

Anderson, a first-year head coach, has his Cougars back in the playoffs in his debut season after Lawrence County failed to win a district game in 2017.

The scouting report on the Cougars could be printed on a postage stamp.

The Cougars average 279 rushing yards per game and feature a stable of ball carriers. Leading the pack for the Cougars is junior Kylan Cooper, who’s rushed for 1,079 yards on 127 carries in 2018. Cooper is averaging 8.5 yards per carry, 107 yards per game and has run for a team-high 12 touchdowns.

Junior Antwan Pittman is next on the team with 589 yards, and is followed by junior Perez Tyler with 319 yards. Junior tight end Brian Bogan is the biggest receiving threat for the Cougars, as he’s caught six passes for 202 yards and three scores.

The Cougar defense is led by a trio of senior defenders in their leading tacklers Jeremiah Sumrall, Jerome Dudley and Jadarius Grandberry.

Kickoff is scheduled for 7 p.m. Friday in Florence.

The Mississippi Association of Independent Schools recently approved the athletic districts plan for the 2019-2021 seasons, and the realignment is... read more