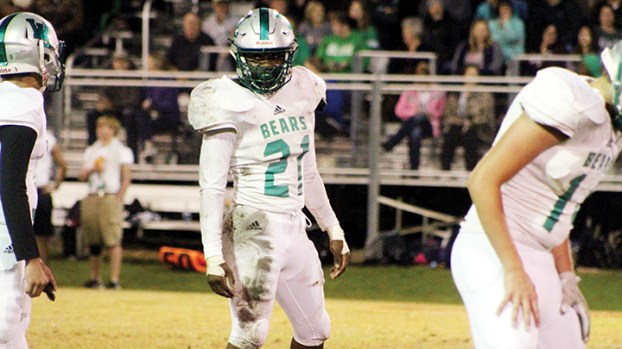 Photo by Cliff Furr West Lincoln junior running back Michael Brothern will be counted on to help carry the West Lincoln offense tonight as the Bears travel to Pelahatchie for the playoffs. In 2018 Brothern has rushed for 1,044 yards and a team leading 13 touchdowns.

Bears get rematch with Chiefs

The West Lincoln Bears (3-7) will make school history Friday night when they travel to Pelahatchie (10-1) to take on the Chiefs in the opening round of the 2A state playoffs.

This is the third playoff berth in the 20-year history of the Bear football program. It comes on the heels of a home playoff game in 2017 and is the first time for West Lincoln to make the post-season in consecutive seasons. The home playoff game last season was the first in school history as the only other previous playoff game was played on the road in 2014.

The Bears actually withdrew from region play during the 2011-2012 seasons and played as an independent. During that time, West Lincoln was free to schedule whomever they wanted, as they sought wins on the field and to build interest in the program. In the previous seven seasons before the move to independent status, the school had posted a combined record of 5-71.

Since hiring B.J. Smithhart, West Lincoln is 8-13 over the last two seasons. A 2-0 start to this season had momentum riding high for the Bears before injuries and a challenging portion of their schedule saw West Lincoln lose five in a row.

Part of that brutal stretch of scheduling was a game against Friday night opponent — the Pelahatchie Chiefs — on Sept. 7. Pelahatchie won that game 56-0 in what was West Lincoln’s homecoming.

Pelahatchie has one on the most dynamic athletes in the state at quarterback in Javeious Purvis. Purvis is committed to Mississippi State and will most likely play safety in Starkville. As a high school senior, though, he’s a do-everything, touchdown-scoring machine for his team. Purvis has racked up 2,639 yards of total offense in 2018 and accounted for 36 touchdowns.

Pelahatchie dropped a game to Mobile Christian (Alabama) in an out-of-state matchup during week two. Since then, they’ve won nine games in a row. Their closest win during that time was a 21-19 victory that gave 10-1 Scott Central their only loss of the season. They went unbeaten in their region after winning their four games by an average of 37 points.

Pelahatchie jumped out to leads of 21-0 after the first quarter and 42-0 at halftime when they last met West Lincoln. The Chiefs have topped the 50-point mark in five games this season.

Kickoff in Rankin County is scheduled for 7 p.m. Friday night.

Playoff football is coming back to Troy Smith Field, as the Bogue Chitto Bobcats host the Madison-St. Joseph Bruins on... read more