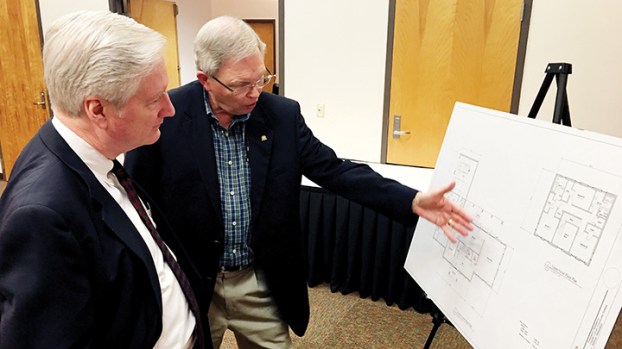 Photo by Adam Northam Pictured are, from left, Copiah-Lincoln Community College Board of Trustees attorney John Henley going over architectural plans for a new president’s house with trustee Melton King.

The president’s house at Copiah-Lincoln Community College will be razed, and a new, modern home will be built in its place.

The Co-Lin Board of Trustees made that decision in early October, and on Thursday they got a chance to see the preliminary drawings for the new, two-story home the special committee has decided to build for Jane Hulon and whomever serves in the college’s top spot in the future. The new home will measure around 3,400 square feet and will feature spacious first-floor rooms where the president can entertain alumni, donors and other special college guests.

“The next step is that the architect is going to move toward nailing down the actual drawings and doing some specifications so we can get some bids,” said trustee Melton King, head of the special committee appointed to handle the project. “We bring this to (the board) as a very preliminary report, but we are moving fast and we’d like to get this project underway.”

King said the rebuild is in too early a stage for a firm price estimate, but common rates for new home construction are running around $150 per square foot, he said, giving the new president’s home a ballpark cost of $510,000, not counting the cost of demolition and cleanup of the existing home.

King and the committee said in September the existing president’s home — a 3,500 square-foot, five-bedroom ranch house built in 1972 — had grown antiquated due to lack of updating over the years, and its small rooms make entertaining college supporters difficult. The committee also dislikes the current home’s low roofline, septic system and ceiling-housed plumbing, which has broken numerous times and caused big cleanup bills for the college.

King’s committee was formed in 2015 to decide whether or not the president’s home should be renovated or demolished in favor of new construction. The committee settled on building new and the board agreed last month, as the cost of renovating the home to desired specifications were estimated to reach up to $250,000.

Hulon said the Co-Lin Foundation’s finance committee is considering chipping in for the new home’s construction.

King also told trustees construction on Nettles Hall, the new girls’ dormitory on the Wesson campus, was winding down, and he expects to occupy the facility in January. A bid-opening for a campus paving project on the Wesson campus will be held on Nov. 8, and the board is waiting for the state Bureau of Buildings, Grounds and Real Property Management to hold a bond sale for funding to build the new diesel laboratory on the Natchez campus.

Workers will begin pouring the foundation for the new Simpson County Center on the campus in Mendehall on Dec. 19, King said.

“There’s lots going on in the buildings and grounds area right now,” he said.

Saturday will be the last day for absentee voting prior to Tuesday’s election, which will mostly decide races for U.S.... read more