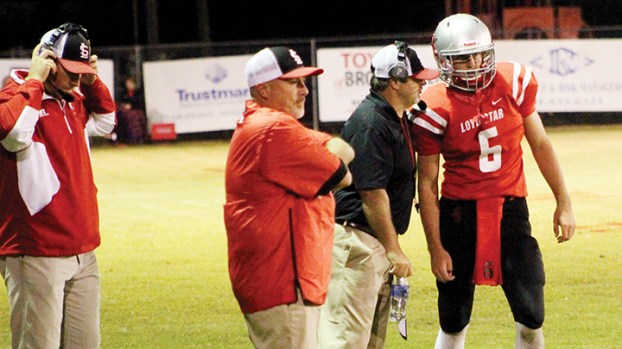 Photo by Cliff Furr Loyd Star head football coach Brian Ford calls out a play to senior quarterback Dane Smith as assistant coaches Seth Britt and Scott Leggett look on. Ford and the Hornets host the Mize Bulldogs tonight in the opening round of the MHSAA 2A state playoffs.

The Loyd Star Hornets (7-3) will be facing a program steeped in tradition when they host the Mize Bulldogs (3-8) on W.E. “Sambo” Smith Field Friday night in the opening round of the MHSAA 2A State Playoffs.

The Hornets are the top seed out of Region 7-2A, while the Bulldogs were the fourth-place team in Region 6-2A. Directly after his team wrapped up their perfect region record with a win over West Lincoln last week, Hornet coach Brian Ford was thinking about the Bulldogs. Loyd Star had the advantage of knowing who its opponent would be for the last two weeks, as both teams have been locked into their playoff position for that long.

“Mize is going to be a physical team,” said Ford after his team had beaten West Lincoln. “They’ve battled some injuries this year, but they’re well-coached and they play very hard. You can’t look at their record and make any judgements about them. They’ve played a tough schedule and are in a very good region.”

The Bulldogs are coached by their longtime leader Kenny Robinson. Mize tied for first place in their division in 2017 with a 3-1 region record and an overall mark of 7-5. Robinson has been a part of the program for 37 years. This year is just the third losing season in Mize football history. The school has won four 1A state championships in their history.

Kickoff between the Bulldogs and Hornets is scheduled for 7 p.m. Friday night.

Bears get rematch with Chiefs

The West Lincoln Bears (3-7) will make school history Friday night when they travel to Pelahatchie (10-1) to take on... read more