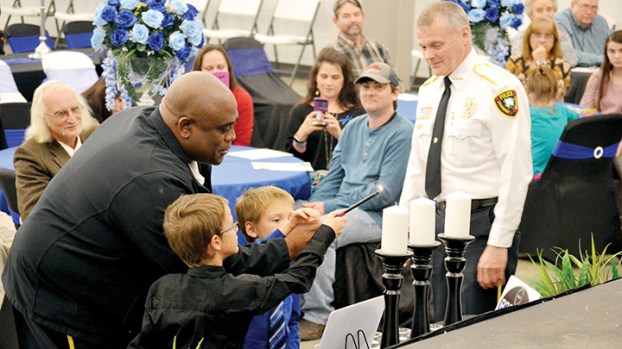 Photo by Donna Campbell/Brookhaven Police Chief Kenneth Collins and Assistant Chief Chris Case assist J.C. and Lee White, sons of Officer James White, as they light a candle in honor and memory of their father. 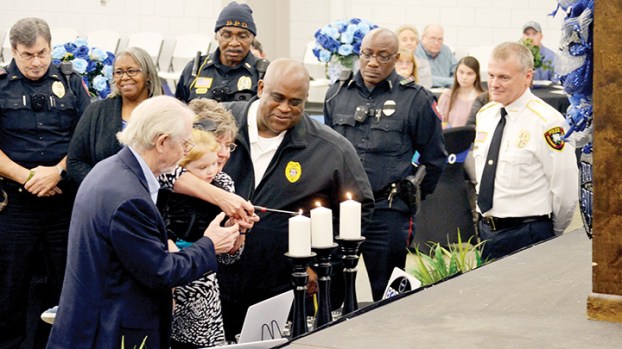 Photo by Donna Campbell/Marshall and Vicki Moak, parents of Cpl. Zack Moak, light a candle for their son with assistance from Cpl. Moak’s niece, Avery. They are joined by Chief Collins. Standing with them are, from left: Lt. Mike Norris, investigator Penny Banks, Lt. Michael Harvey and officer Fred Daniel. 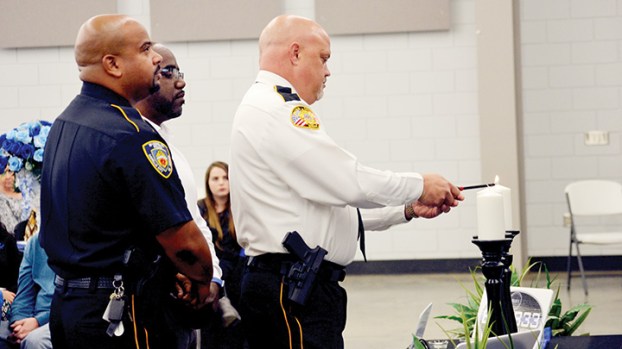 Photo by Donna Campbell/Lincoln County Sheriff Steve Rushing lights a candle in honor and memory of deputy William Durr, killed in the line of duty in May 2017.

Three-year-old Avery Moak — with help from her grandparents — lit a candle Thursday night to honor her hero, Uncle Zach.

To the little blond girl, her uncle was everything, a man who loved her dearly and spoiled her as much as time and income allowed.

To the others in the room at the Brookhaven Building, he was a law enforcement officer who died trying to protect and serve.

Cpl. Zach Moak and patrolman James White were honored by the International Conference of Police Chaplains with a ceremony attended by the fallen officers’ families and members of several law enforcement agencies.

Moak and White died Sept. 29 while responding to a police call on North Sixth Street. Their funerals were attended by state and local dignitaries and hundreds of law enforcement officers from several states.

The ICPC, represented by Chaplain Pat Butler of Brookhaven, presented plaques to the officers’ families and led a candlelight ceremony for the two men. Butler hosted a similar reception nearly 17 months ago for the family of William Durr, a two-year veteran of the Lincoln County Sheriff’s Office and a four-year veteran of the Brookhaven Police Department.

Durr was killed May 27, 2017, while responding to a domestic disturbance at a house on Lee Drive in Bogue Chitto.

Gatlin, a former Lincoln County Sheriff’s investigator, shared stories about White and Moak. He offered encouragement to their families.

“We’re here and we’re going to remember your loved one because he was our loved one as well,” he told the two families who filled six round banquet tables near the stage. “Do not let your faith be shaken because God has a plan.”

Rushing also offered support to the Whites and the Moaks.

“My heart goes out to you every day,” he said. “There’s no words we can say other than we’re here. We’re here to help you in any way we can.”

He noted the similarities between the two Brookhaven officers and Durr, who he said loved children and his community just like White and Moak.

“Couldn’t ask for a greater guy. He loved doing his job and he died doing what he loved to do,” Rushing said.

Police Chief Kenneth Collins talked about the blessings all around Brookhaven and Lincoln County from the forests of pine trees to lakes brimming with bass, the downtown split by roaring trains, “football, basketball, apple pie, hot dogs and baseball, kids playing everywhere you see” and the flag waving in the breeze on Brookway Boulevard.

“That is what all these officers gave their lives for,” he said. “Zach, James and William. I knew all three of them. There is no greater love than to give your life for a community or for someone else.”

He said the city needs to work together to create a better community.

“We are Lincoln County. We are Brookhaven. We will fight together.”

Collins said peacemakers like Durr, Moak and White and law enforcement officers like them are blessed and should be called the children of God.

“We are the world. We are God’s children and we’ll see them another day but until that time comes they will not have died in vain. We will never give up,” he said. “So when we see hate anywhere, knock it down. We are God’s children, let’s always act like it and let’s save and protect our beautiful town.”

Collins and Assistant Chief Chris Case assisted White’s sons, J.C. and Lee, as they lit a candle for their father.

Butler also presented Collins and his department with plaques for Moak and White.

She said the ICPC will include the two men in a national memorial service in July.

Vicki Moak said the support from the community over the past month has been overwhelming. She’s thankful for the phone calls, texts, cards and messages left on her son’s Facebook page, which she kept active after his death. She enjoys reading notes from people who said her son shared scripture with them or gave them an encouraging word when they needed it most.