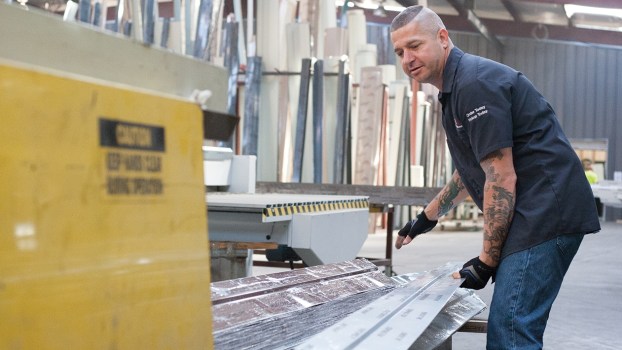 The sale was made. It was a done deal.

The buyers drove away after a handshake from Reed’s Metals owner Bernie Reed, and a promise to have a quote on the cost of a pile of purlins in a few days. He watched them disappear down the road, walked into the little shack that, back then, was company headquarters and asked his partner, David Forehand, an important question.

In 1998, Reeds Metals was a side business, a portable building and a metal-cutter in a field full of cows and chickens in Lawrence County. Reed didn’t know the proper name for the beams that run longways down a roof to hold it up, or much about metal at all, really. His main gig was planting pines and driving 18-wheelers, and Forehand made trips up and down the Gulf and East coasts, buying truckloads of fish for a seafood distributor. For a couple of laborers, Reed’s Metals was more labor — they got in a few hundred sheets of metal every week and sold them to whomever came looking for a few feet of steel.

But they were building a business on promises — Reed and Forehand unraveled the mystery of purlins and had them ready by the time the buyers came back — and, 20 years later, keeping those promises caused Reed’s Metals to gross $108 million in revenue from its seven locations across six Southern states.

The big earnings, the storefronts from Missouri to Florida, the long line of contractors in their big Chevrolets and 20-foot haulers that reach back, out of the Brookhaven manufacturing plant every day, have drawn the attention of competitors and investors for years. Reed has always taken their phone calls, read their letters and forgotten them.

Until a fall day in November last year, when FedEx brought an offer letter from Industrial Opportunity Partners, a billion-dollar investment firm that specializes in manufacturing.

“I could tell this one was a very serious inquiry, and it was an opportunity,” said Reed, 49. “This was the real deal. I went home that night and sat down in a chair and just stared at it, speechless. I built this company 20 years ago, and this just kind of felt like a divorce — except you get paid, instead of paying out.”

IOP sent Reed a letter of intent in March 2018, and negotiations took all year long. The big investment group hired a mergers and acquisitions speciality firm out of Texas whose attorneys went over Reed’s Metals’ financial data for months. They finally signed the deal on Oct. 31, purchasing all seven locations, every piece of equipment and property and making Reed a high officer in the firm who will scout out new opportunities for expansion of the business that, although sold, will continue to bear his name.

The terms of the deal were not made public. The deal made millionaires out of Reed’s partners at the other locations and brought down big bonuses for some highly-placed employees. It also made a new life for Reed, who celebrated last week with a cup of coffee in a “debt free” mug while wearing a T-shirt that says, “What’s a Purlin?”

“If I never wanted to work another day in my life, I could live a nice life,” Reed said. “But that’s not me. I want to put my money to work.”

In addition to scouting as a board member for IOP, Reed will continue to have a hand in the operation of Reed’s Metals and be free to grow his side businesses — Coast to Coast Steel Products, a steel wholesaler; Clay’s Transport Inc., a trucking company; Reed’s Investments, a capital company that supports the other ventures; and The Hideaway, an event venue at Reed’s farm.

Back then, Forehand and his family, along with the Reeds — a total of 13 people — shared a two-bedroom home on Hwy. 27 outside Monticello while the metal business was just a shack and a hope. Reed had moved into the area from Horseshoe Beach, Florida, to plant pines and called for Forehand, his partner in building docks and boathouses down on the Gulf Coast, to join him.

“He said, ‘Let’s do it, man.’ So we did, on a whim,” said Forehand, 56. “Neither of us knew anything about the steel business. We were selling to people walking in there and learning as we went.”

The first truckload was dropped off at Reed’s Metals in June 1998 — 50 sheets each of seven different colors. They unloaded, stacked and cut the sheets by hand, their inventory resting out on the open, piled on treated 4-by-4s to keep the metal out of the dirt.

Reed and Forehand needed help. Greg McGuffee, 57, had just been laid off and was working for a logger, but was asking around Monticello for other work when he ran into Forehand at a grocery store. Forehand invited McGuffee to follow him out to the shack to meet Reed.

“I shook Bernie’s hand and said, ‘Hey, I’m Greg and I’m looking for a job,’” said McGuffee, a metal salesman at Reed’s Metals. “Bernie didn’t tell me what I’d be making or nothing. He just said, ‘Come on and follow me.’ He gave me a tape measure and showed me how to work the T-handle. I worked a whole week without even knowing what I was making. But Bernie and Davey were some good ol’ boys and I liked working with them. Bernie paid me at the end of the week.”

Reed’s Metals grew and eventually moved to its present location on Hwy. 84 in Brookhaven. It was a dependable little outfit until Aug. 29, 2005, when Hurricane Katrina pulled the roofs off a few thousand buildings across Louisiana and Mississippi. When the skies cleared and the rebuilding began, contractors swarmed Reed’s Metals and made it the company it is today.

The shop ran three shifts, 24 hours per day, for six straight months to keep up with demand. More help was needed. Melissa Lambert, 46, started answering the phone at Reed’s Metals on Sept. 5, 2005, the first day the plant reopened after the storm. She closed down Center Stage Video, her own movie rental store in Monticello, where she had met Reed and his family, to take the job.

Since then, she’s worked in every department and now handles leads and customer service.

“I thought it might be a chance to better my future, and it was,” she said. “I’m excited about the possibilities the future holds for Reed’s Metals, the advantages we’re going to have in the marketplace.”

During all those openings, the main manufacturing facility in Brookhaven crawled across the acres near East Lincoln Road, going through numerous redesigns and expansions. The business now runs on the promise of same-day pickup for metal roofing, and pre-manufactured steel buildings are ready in a couple of days. A fleet of 18-wheelers and one-tons scoot across the South delivering to customers.

All that will continue with Forehand taking over as general manager in Brookhaven while Reed turns his attention to the west, maybe Texas, for the eighth Reed’s Metals location.

“Honestly, it’s kind of sad that it will be totally out of our hands,” Forehand said. “Nothing is gonna change in the way we do business, and I’ll stay right on a while longer. But there’s just something about somebody else taking over what you’ve done for years and years. But it will be good for this company, and it will be neat to watch them expand the business.”