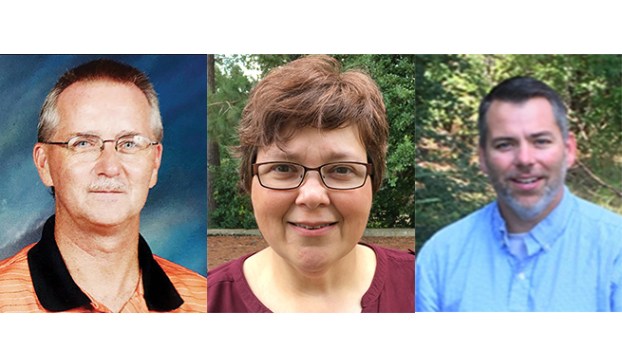 When Billy Vaughn stepped into the race for school board, the first man to get his business card was his father, Peck Vaughn.

The 96-year-old’s yard was the first patch of grass to grow a “Billy Vaughn” campaign sign. And Tuesday night, as he hung on, barely, after his second stroke in a week, the old man known around Lincoln County for building Habitat for Humanity houses was the first to hear from his son about the win.

“My goal and my prayer was that he would hold on until I could tell him I won,” said an emotional Billy Vaughn late Tuesday night. “Then I told him if that’s what he was waiting on, he could go on home.”

Vaughn cruised to victory on Election Day in his race for Lincoln County School District Board of Trustees Educational District 2, where he defeated longtime incumbent Johnny Hart by gaining 61 percent of the vote, with 721 ballots to Hart’s 459. Vaughn will join the school board as the next representative for the mostly-Loyd Star district when his new term begins in January.

“God is good,” Vaughn said. “The support of the people in the community was overwhelming. Everybody was extremely positive, and I’m looking forward to serving them on the school board. I saw people when I was out campaigning that I haven’t seen since I was at Enterprise in the late 1980s and early 90s.”

Vaughn won’t be the only new face on the Lincoln County school board in 2019.

District 4 Trustee Diane Gill will still be there, but District 3 now belongs to Brian Magee after his appointment last month to fill a vacancy there, and Justin Laird is taking over District 1 in an unopposed election after longtime incumbent Kay Coon decided not to seek reelection.

It’s a toss-up in District 5, where challenger Timothy Cunningham outpaced incumbent Joanna Posey in vote totals and may or may not have hit the required 50 percent plus one vote to take the race outright.

Lincoln County Circuit Clerk Dustin Bairfield said subtracting the five write-in votes cast in the election — which Mississippi law only counts in the event of a candidate’s death — from Cunningham’s total of 617 votes puts him at 50.04 percent of the vote, a razor-thin margin that, this morning, might make him the winner and avoid a predicted runoff with Posey.

Bairfield said he’d placed a late-night call to the Mississippi Secretary of State’s Office to look into the math but did not expect an answer before press time Tuesday night.

In the meantime, the top two candidates in District 5 are planning to face off again on Nov. 27.

“I’m feeling very positive about it,” Cunningham said. “The response of the people during this campaign has been just phenomenal, a very humbling experience. I’m excited about the opportunity for a runoff.”

While Vaughn’s race was a general election for a six-year term, the District 5 race was a special election for a four-year term, a rescheduling of the county school board’s election cycle in an effort to correct missed elections in 2014 and 2016. Vaughn just had to win, but Bairfield said Cunningham or Posey had to get 50 percent of the vote, plus one, to avoid a Nov. 27 runoff.

All seven District 5 precincts reported in early on Tuesday night, and Cunningham watched his vote total hang at 50.48 percent for hours with more than 1,000 absentee ballots waiting to be counted from around the county.

But when the final count was made — all but three ballots, countywide, unverified until an ID is shown — Cunningham’s lead dropped to 49.84 percent (617 votes) to Posey’s 28.68 percent (355 votes). Retired Loyd Star teacher Lora Hedgepeth gathered up 21.08 percent of the vote, with 261 ballots, but did not earn a spot in the runoff.

“I’m going to continue to beat on some doors, continue to voice what I bring to the table,” Cunningham said. “I still believe I can work very well on this board to help create a vision that will help focus our school district.”

Cunningham may have the edge in the coming three weeks — Posey will spend a third of that precious campaigning time in Louisville, Kentucky, watching her children compete in the 2018 North American International Livestock Expo.

“I’m gonna have to do some phone calls and get door-to-door while I have time,” Posey said. “I’m proud to see what a great turnout we had, and I hope the runoff will draw another good turnout.”