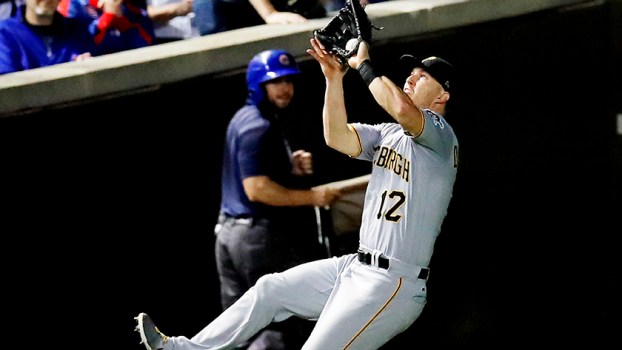 Pittsburgh Pirates' Corey Dickerson makes a catch for an out on a ball hit by Chicago Cubs' Kyle Schwarber during the fourth inning of a baseball game Monday, Sept. 24, 2018, in Chicago. (AP Photo/Jim Young)

As with any small town in Mississippi, Brookhaven is a place that is fiercely proud of those who grow up in the area and then go on to accomplish great things. We can claim an NFL Hall of Famer, United States Congressmen and women, and even the guy who started MTV.

Brookhaven Academy alum and current Pittsburgh Pirate Corey Dickerson put a prestigious trophy on his shelf this week when he was named a 2018 Major League Baseball Gold Glove winner.

The Rawlings Gold Glove Award is given each year to one player at each position in both the National and American Leagues. The player picked is considered to be the best fielder at their position in their league.

Many assumed the award would go to Christian Yelich of the Milwaukee Brewers. Yelich is the likely NL MVP and won the Gold Glove for left fielders last season.

Dickerson, who has previously played for the Colorado Rockies and Tampa Rays, is known for his sweet swing and pop at the plate. His bat is what put him on the 2017 American League All-Star team. He has never been hailed for his defensive play.

Being labeled a below-average fielder who can hit wasn’t a tag that Dickerson wanted to wear any longer.

“I’m just a small-town guy that’s motivated to prove doubters wrong,” said Dickerson. “This is an achievement that everyone thought was impossible, except for me.”

After serving as a designated hitter during most of his two years in Tampa, Dickerson came to the Pirates healthy and focused on showing he belonged on the field.

He played in 135 games this season for Pittsburgh and led all NL left fielders with eight Outs Above Average. Outs Above Average (OAA) is a metric of skill that takes into account how many plays an outfielder makes and how difficult those plays were, and compares them to their peers. Dickerson was also second in the NL with seven outfield assists.

So how does one go from being labeled below average to best at their position? Dickerson credits his workout plan for improving his play and possibly extending his career.

“I changed the way I work out before the 2017 season,” said Dickerson. “I started reading books like “Becoming A Supple Leopard” and focused on spine engine mechanics and mobility.”

Traditional lifting wasn’t what made Dickerson better. It was listening to the advice of one of the greatest athletes to ever pick up a ball.

“The TB12 book written by Tom Brady about flexibility and nutrition was an important resource for me,” said Dickerson. “My trainers put together a great plan that involved core stability, balancing, footwork, and functional exercises that made me more athletic.”

“The TB12 Method: How to Achieve a Lifetime of Sustained Peak Performance” is a look behind the curtain into what allows Brady to compete at such a high level at an age when most quarterbacks have long since retired.

For those who watched Dickerson dominate while playing football, baseball and basketball at Brookhaven Academy, the idea of him becoming more athletic sounds absurd. A 2008 BA graduate, Dickerson was drafted in the eighth round of the MLB Draft out of Meridian Community College by the Rockies.

Losing 25 pounds after being injured in 2016 was a starting point for Dickerson improving his mobility and agility. He feels healthier and more durable now than he has ever felt in his young career.

This season at the plate, Dickerson hit .300, which was better than his average both seasons he played in Tampa. Dickerson hit 13 home runs, a career high seven triples and drove in 55 runs for the 82-79 Buccos. His improved speed and quickness is also evident in that he tied a career high with eight stolen bases.

Not only did Dickerson win the award by beating out one of the best players in the game, he did it in a home ball park that has a reputation of being a tricky place for left fielders.

The deepest part of the outfield in PNC Park is in the left-center field alley. The wall — a cutout that is known as “The Nook” — is 410 feet from home plate, which makes it the deepest left field in the majors. The park — often hailed as one of the most beautiful in the league — also is known for sometimes unpredictable winds that come from it sitting near the banks of the Allegheny River.

The advice that Dickerson has for those young athletes who wish to improve their game is simple. There was no magic potion that earned him this award. It came from practicing the little things as often as possible.

“I focused on the fundamentals and having the confidence to make every play,” said Dickerson. “I try to be fundamentally sound and get the ball in as quick as possible.”

Dickerson is just as unassuming and humble now as he was in high school. Always considered a great teammate for how hard he played the game, his success hasn’t changed who he is — a kid from Southwest Mississippi that’s living his dream as a big-league player.

The sea of affection and admiration for him from this area doesn’t go unnoticed, even if he does now spend over half the year on the East Coast.

“I want to thank all of my family and friends back home that support and believe in me,” said Dickerson. “Winning the Gold Glove is very satisfying, and I’m blessed to be an example to people that anyone can achieve or be anything they want to be when they set a goal and then relentlessly work at the small details to achieve that goal.”

Hunter Richardson signed a letter of intent with Jones County Community College in a ceremony on Nov. 1 in the... read more