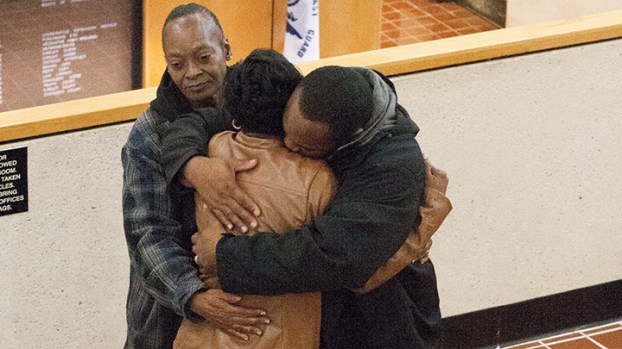 Photo by Adam Northam/Family members of one of the eight victims of the 2017 Memorial Day weekend massacre embrace Tuesday following a court hearing for accused killer Willie Cory Godbolt.

A Lincoln County judge has established a set of deadlines for speeding up the capital murder case against Willie Cory Godbolt after telling attorneys Tuesday he intended to move “rapidly” toward a trial date.

Lincoln County Circuit Judge David Strong instructed prosecutors and Godbolt’s defense team to have all pretrial motions submitted by Jan. 10, and to have all responses to those motions turned in by Feb. 11. He plans to hear and rule on the motions Feb. 22 and intends to start the trial as soon as possible afterward.

“We are going to start moving this thing toward trial rapidly after the first of the year,” Strong said. “It’s going to be sooner, rather than later.”

Strong made the decision at a status hearing for Godbolt, who is charged with four counts of capital murder, four counts of first-degree murder, attempted murder and kidnapping charges in connection with the May 27 and 28, 2017, killings of eight people from Bogue Chitto to Brookhaven. He was arrested early on May 28, 2017, and has been held in the Copiah County Jail ever since, making several short appearances in court for status hearings.

Prosecutors are seeking the death penalty against him.

State public defender Alison Steiner warned that numerous motions on Godbolt’s behalf may be forthcoming, including an expected motion to move the trial out of Lincoln County and possibly a motion to split the charges into several smaller cases. She said Strong’s wish to move toward an omnibus hearing — a pretrial hearing in which evidence is considered — might be “premature,” considering the expected amount of motions she plans to file.

But, so far, few motions have been filed, and Strong expressed frustration over the wait.

“Why haven’t they been filed?” Strong asked. “(A change of venue motion) is the simplest motion that can be filed.”

Prosecutors also appear to be trying to spur the defense team into action. Godbolt’s defenders have not filed a motion to have the defendant undergo a mental evaluation, so Lincoln County Assistant District Attorney Brendon Adams on Nov. 5 made the request for the state.

As the hearing started, Strong attempted to “short-circuit” any arguments over Godbolt’s competency, but Steiner said her office is still pursuing its own mental evaluation of Godbolt and, so far, has not had a reason to request a court-ordered analysis.

“If it gets to the point you think there’s any problem with the defendant’s competency, you need to bring it to the court as quickly as possible,” Strong said.

Steiner said the limited manpower of the state public defender office, which assists local public defenders on death-penalty cases, has been tied up throughout the summer on other cases around the state. With those cases now ended, the office is ready to turn its full attention to Godbolt and will begin dropping in motions soon, she said.

“We now have the personnel who are able to do that,” Steiner said. “We are now in position to begin setting motions and getting them heard. We will move as fast as we can.”

Steiner expressed concerns over Godbolt’s right to a fair trial if the case was pushed too fast, telling Strong the upcoming holiday season is a difficult time to schedule and conduct witness interviews. After that discussion, Strong set the dates for motions, but reiterated his desire to push the case along.

Steiner and Godbolt’s local public defender, Jason Tate, also told Strong they were missing the last two autopsy reports from the eight victims. Adams said all the state’s discovery is complete and all autopsy reports should have been sent, offering to retrieve the missing records from his office.

“If you don’t have them, you can leave here with them today,” he said. 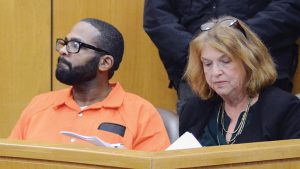 Santa’s ready for his closeup with your pets

Volunteers at Brookhaven Animal Rescue League like to tell about the time Santa posed with pets on a motorcycle for... read more