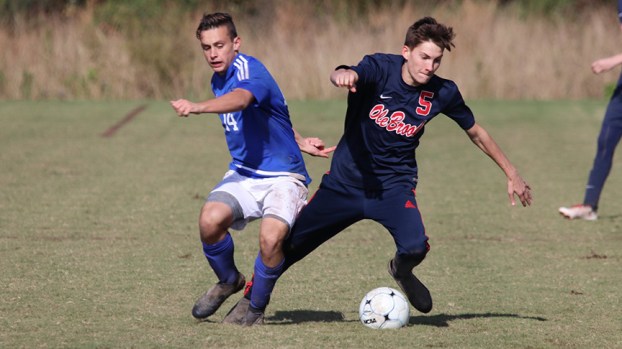 Photo by Terri Mabile Cory Patterson of Brookhaven High School collides with a player from Stone County on Saturday in Laurel. BHS hosts McLaurin on Friday night with the girls’ game beginning at 5:30 p.m. on King Field.

The rainy weather drenching the area for the last week has caused some readjustments and cancelations in the soccer schedules of most area teams.

The MHSAA season officially kicked off at the beginning of the month, but the area scene always picks up with the tournament hosted by Loyd Star that took place last week. Here is the latest after the first two weeks of the season.

The Lady Panthers are coached by longtime leader Kevin Bower. BHS (0-3-1) tied 1-1 with Loyd Star earlier this season. Leyton Roberson scored the lone goal for BHS against the Lady Hornets. The Lady Panthers are coming off a 10-8-2 season in which they lost to Pearl River Central in the opening round of the 5A playoffs after winning their region.

Brookhaven has a mixture of new and old players that has Bower still trying to find the right combinations.

“We’ve got a lot of new players,” said Bower. “We’re still working on playing together as a team. We’ve got a mix of returnees, players that have moved up from the junior varsity, and a few new girls from the Mississippi School of the Arts.”

Thus far in 2018, the Panthers are 1-3, as they rebuild after losing a senior class filled with starters last season. Brookhaven defeated Loyd Star 7-0 to get their first win on Nov. 8. Anderson Turpin notched a hat-trick with three goals in the win over Loyd Star. Cory Patterson and Samari Stewart scored two goals apiece against the Hornets.

BHS next plays on Friday when they host the McLaurin Tigers.

Both Loyd Star teams are coached by Dale Brister and both had solid showings in their home tournament on Saturday.

The Loyd Star boys got the tournament started with a 3-1 win over McComb and the girls took a 4-1 win over Crystal Springs, and then a 4-0 victory from ACCS.

Loyd Star plays in Region 7-1A/2A/3A with Franklin County, Wesson and West Lincoln. The Loyd Star girls just missed out on the playoffs last season with a 7-8-3 record, as 2-1 and 2-0 losses to Wesson put them in third place in the division.

The Hornets are on the road Friday at Lawrence County.

Wesson is coming off a season in which they finished region runners-up to Franklin County with both teams. The 11-11-1 boys’ team beat Magee last season in the first round of the playoffs before being knocked out by Sacred Heart. The 16-6 girls’ team lost their playoff opener to North Forrest.

Both teams are coached by John “Bobo” Douglas. Wesson has some of the highest participation numbers in the area for soccer. That has resulted in a strong junior varsity program that has been called on this year to restock the varsity after losing experience to graduation.

“We lost a really good group of seniors on both teams last year,” said Douglas. “The girls only returned four starters back and, with a young group, we’ve been continually working on fundamentals. The guys had a lot to replace as well, but I’ve got a good group that’s working together and improving. It’s good to be able to bring up new players who’ve gained junior varsity experience.”

The Wesson girls are currently 4-2 and the boys are 3-3. Both teams host North Pike on Thursday.

The Lawrence County Lady Cougars are 2-0-1 and under the direction of head coach Andrew Haygood. On Saturday at the Loyd Star tournament, they beat Crystal Springs 4-1 and tied 2-2 with McComb. LC also owns a 5-1 win over Jim Hill.

On the boys’ side, the Cougars are 2-1 and coached by Justin Daley. On Saturday the Cougars picked up a 4-2 win over Wesson and a 4-1 victory over Adams County Christian.

Lawrence County plays in a division with Sumrall, McComb and Mendenhall. Additionally, Purvis is in the region with only a girls’ team.

The Lawrence County boys were runners-up to Sumrall last season and were eliminated from the playoffs by St. Stanislaus after finishing the season with a 7-8 mark.

The two newcomers to area soccer look to continue growing their programs this season.

Bogue Chitto coach Shane Nippe and his team will host 5A Natchez on Thursday. In the second season of soccer for the Bobcats, Nippe has seen participation go up.

“The kids that returned from last year have shown improvements and we’ve added several new players that are helping us out as well,” said Nippe.

West Lincoln is in year three of soccer and won’t play their first match until Nov. 27 when they host Bogue Chitto.

The West Lincoln boys are coached by B.J. Smithhart and the girls are led by Nicole Scott.

“We’ve got our top four goal scorers back,” said Rounsaville. “With nine starters back we’re hoping to make a run at the district title this year.