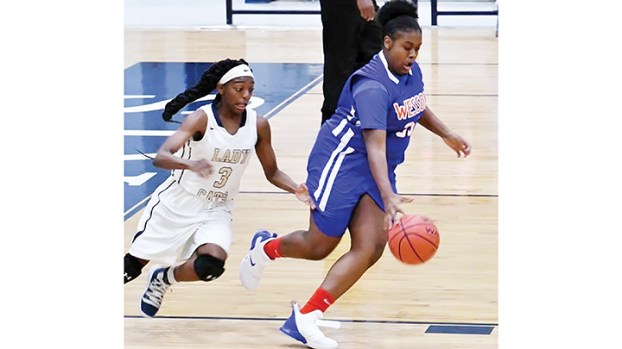 Photo by Stacey Leake Bogue Chitto guard Cheyanne Hall chases down Alashyia Mims of Wesson on Tuesday night. Mims scored a team high 10 points for the Lady Cobras in their 35-22 loss to the Lady Bobcats.

The Wesson Cobras visited Bogue Chitto on Tuesday night for a varsity doubleheader with the homestanding Bobcats.

“The team hustled and played well together,” Leake said. “Our shots weren’t falling but we were able to get the win.”

Lady Bobcat Cheyenna Hall agreed the team struggled shooting, but made up for it with effort.

“Our shots weren’t falling tonight,” said Hall. “We all played together tonight, though, and it was a team effort.”

Down 7-4 early, the Lady Bobcats would pull within one as Katelynn Palmer netted a basket. BC then took the lead soon after on a DeAnna Edwards bucket.

“I was disappointed in the second half, but not over the effort from the girls,” said BC coach Robbie Walters. “We need to get the basketball inside more. We didn’t shoot the ball well in the second half and I think we’re still rushing our shots and not setting our feet. I loved the effort, though.”

Palmer led the Lady Bobcats with 12 points. Edwards and Hall scored eight points apiece for BC.

In the boys’ game, the young Bobcats were overpowered by a Wesson team that has no problem putting points on the board, as the Cobras led 33-4 after the first quarter.

“I thought we came out really aggressively on defense and created a lot of turnovers and turned them into points,” said Wesson coach Rusty Newman. “We were able to get up big early and momentum carried us the rest of the way. I’m proud of the guys and thought they played well throughout the whole game.”

Wesson’s defensive pressure caused havoc for Bogue Chitto, creating turnovers at will. Wesson also won the war on the boards and by halftime had all but put the game away.

“We played great and had great defense tonight,” Wesson senior guard J.D. Allen said. “We need to work on blocking out.”

“We have a lot of work to do,” said Bogue Chitto coach Marvin Magee. “We’re a young and inexperienced team.”

Shemar Dickerson led Wesson with 17 points, and Allen chipped in 14. J.T. Smith was the other double-digit scorer for the Cobras with 10 points.

Bogue Chitto is back in action on Friday when they travel to Pisgah. Wesson is at home on Friday hosting Loyd Star.