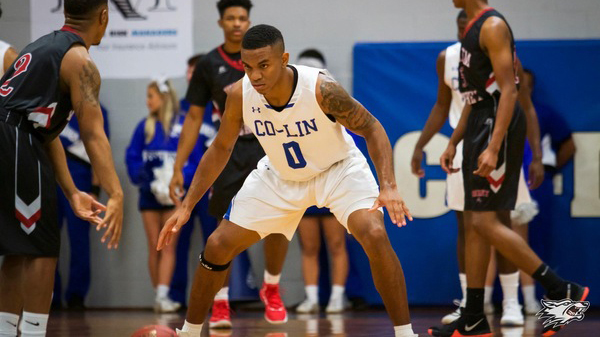 Photo by Co-Lin Sports Information Co-Lin freshman Cameron Woodall is all business during the Wolves’ 95-63 rout of William Carey JV.

The Copiah-Lincoln Community College Wolves had a dominating performance against the William Carey JV Crusaders on Tuesday night. The Wolves’ 95-63 win moved Co-Lin to 3-1 on the year.

Co-Lin is on the road this Friday as the Wolves take on Delgado Community College at the Alario Center in Westwego, La., just outside of New Orleans. Tipoff for that game is scheduled for 7:30 p.m. .

Co-Lin could not have had a better start Tuesday night as the team drained four straight three-pointers from Miles Daniels, Damarius Brooks, and Lazorian McNulty. Just two and a half minutes into the game Co-Lin was already on top 12-3.

That quick run grew over the following minutes as Co-Lin stretched the lead to 19-3, four minutes into the game.

The Crusaders finally found some rhythm on the offensive end, but it was too little too late, as Co-Lin’s lead had stretched to 23, 39-16, with just 4:32 left in the first half.

William Carey went on a brief run in the final minutes of the first half and opening minute of the second and cut the Wolves’ lead to the lowest it had been since midway through the first, 16 points. However, Co-Lin fired an 11-3 run led by Dayquan Perkins, Xavier Heidelberg, and Daniels, to pull the lead back to 27, 61-34.

The Wolves continued to play hard on both ends of the floor for the remainder of the night as the team ran away with the 95-63 victory.

Damarius Brooks led Co-Lin with 22 points, while Miles added 13. Lazorian McNulty netted 11 after going 3-of-5 from three-point range and Lance Madison came off the bench to score nine. Dayquan Perkins led the Wolves on the glass with seven rebounds. Xavier Heidelberg posted a team-best eight assists on the night, while Daniels led the way with three steals.

Jason Santiago and Tjchon Henly led the Crusaders with 11 points each, while Craig Barnes posted a team-high eight rebounds for William Carey.

In pursuit of pronghorn — Brookhaven attorney hunts the grasslands of Wyoming

T he radio in Josh Watts’ truck said 4:11 am when I got in. We had packed our gear into... read more