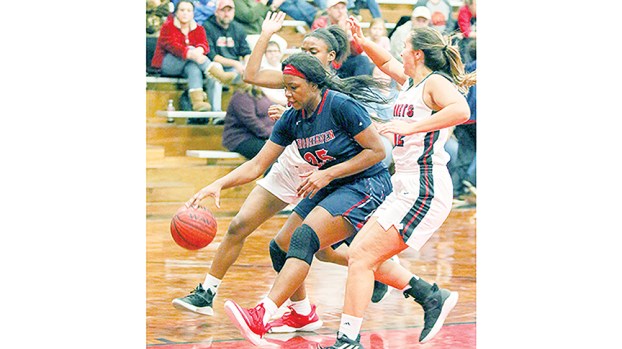 Photo by April Clopton Brookhaven High senior forward Tamia Stallings scored 20 points and grabbed 13 rebounds in a 75-49 win over McComb on Friday night. The loss was the first of the season for McComb. BHS plays tonight at Lawrence County with the girls game starting at 7 p.m.

The Panthers and the McComb Tigers met up Friday night to renew their always-intense hoops rivalry.

Junior forward Silentianna Collins scored 28 points to lead the Lady Panther offense. Senior Tamia Stallings added 20 points and 13 rebounds for coach Preston Wilson, who was obviously pleased with how his team played in the dominating win.

“Our defensive intensity was great from the start,” said Wilson. “We were able to set the tone for the game and maintain it. Silentianna and Tamia continued to give us an offensive boost and I was very pleased with the game overall.”

In the boys’ contest, it was BHS (3-1) senior forward Lafollette Bogan who once again led his team in scoring, as he put up a team-high 25 points in a 65-34 victory over McComb in Sinclair Gymnasium.

BHS is back in action tonight at the Lawrence County Tournament as they play the homestanding Cougars. The girls’ game tips off at 7 p.m. with the boys’ game to follow.

Wesson split their matchup with Loyd Star in the Snake Pit on Friday night.

The Cobras handed the Hornets a 64-50 defeat in the boys’ game behind 16 points from senior guard Shemar Dickerson. Senior wing J.D. Allen added 12 points and junior forward Darrion Gibson chipped in 11 points for the Cobras.

“Our defensive pressure and transition were the difference,” said Wesson head coach Rusty Newman. “We’ve still got some areas in our half-court defense that we need to clean up, but offensively we moved the ball well and got good shots. I’m proud of my guys for playing hard and getting the win.”

The Bogue Chitto Bobcats split with Pisgah on Friday night, as the Lady Bobcats (4-1) took a 38-30 win over the Lady Dragons in Sandhill. In the boys’ game, the Bobcats (1-4) lost a tough 47-43 decision to the Dragons.

“We played well in the second half and especially in the fourth quarter,” said Lady Bobcat head coach Robby Walters. “We created a lot of turnovers and got the ball inside and handled their pressure much better. We still need to settle down and shoot better, but it was a good win.”

The Bobcats return to action after the Thanksgiving break when they host McLaurin Nov. 27.