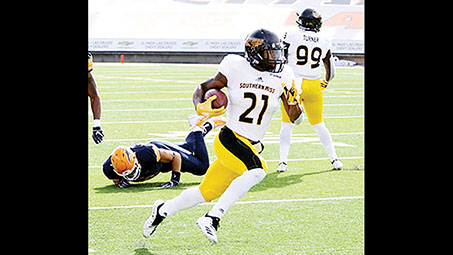 Southern Miss defensive back Rachuan Mitchell (21) returns an interception for a touchdown Saturday against UTEP. It was one of four turnovers forced by the USM defense in a 39-7 victory. (Southern Miss Athletics)

(AP) — Southern Miss is going bowling after all.

Rachuan Mitchell returned an interception 41 yards for a touchdown to spark Southern Miss to a 39-7 win over UTEP on Saturday that made the Golden Eagles bowl-eligible for the fourth straight season and 22nd time in the last 25 years.

Brookhaven High alum and Southern Miss freshman Trace Clopton returned to the field against UTEP for the Golden Eagles. Clopton missed the Louisiana Tech game after sustaining a concussion at UAB.

The Golden Eagles finished the regular season with back-to-back wins for the first time this season, after knocking off Louisiana Tech 21-20 in their home finale last week. It was also their first road win of the season.

They’ll get their bowl assignment after the Conference USA championship game next weekend.

“That’s huge, and to me that is always the goal to be bowl eligible,” Southern Miss coach Jay Hopson said. “Really in the rankings in the conference we’re no worse than ranked sixth. We are excited about that and it is a big deal for us.”

Briggs Bourgeois connected on two 39-yard field goals in the first half and Steven Anderson punched in from the 1 at the end of the first quarter to send Southern Miss into halftime with a 19-0 advantage.

Former St. Aloysius star De’Michael Harris pulled in a 17-yard pass from Jack Abraham for a third-quarter touchdown and Tate Whatley and Trivenskey Mosley had scoring runs of 16 and 24 yards, respectively.

“Obviously the start wasn’t what we wanted it to be,” UTEP coach Dana Dimel said. “We went in with the direct focus of eliminating turnovers, because I really felt like our defense matched up well against these guys and could hold their own if we didn’t put them in bad situations early in the ballgame.”

UTEP’s Erik Brown scored on a 41-yard pass with seven seconds left in the game to spoil the shutout. It was the Miners’ first points against Southern Miss since the first quarter of the 2016 game.

Ky’el Hemby had two interceptions for Southern Miss, which forced four turnovers in all and sacked UTEP quarterback Brandon Jones five times. The Golden Eagles turned the turnovers into 23 points.

“I thought they played fantastic and created turnovers,” Hopson said. “Up until the end when we went prevent (defense) that was the only time we gave up any points. I thought the turnovers were critical especially early in the first half, and guys played hard.”

Abraham was 14-of-20 passing for just 92 yards. Harris caught two passes for 21 yards and Quez Watkins led the team with five receptions for 58 yards.

Instead, the Golden Eagles leaned heavily on the running game as they rushed for a season-high 252 yards. Mosley ran for 107 yards on 14 carries, and Anderson had 92 yards on 19 attempts. Whatley, the backup quarterback, finished with 46 yards and a touchdown.

It was the third time this season that Southern Miss has rushed for more than 200 yards.

“I thought (Anderson) ran extremely well and the guys up front did a great job of blocking,” Hopson said. “(Whatley) did some really good things with the reads and (Abraham) played well also in the first half. Overall it was a good team effort offensively.”

Knott is XC Freshman of the Year