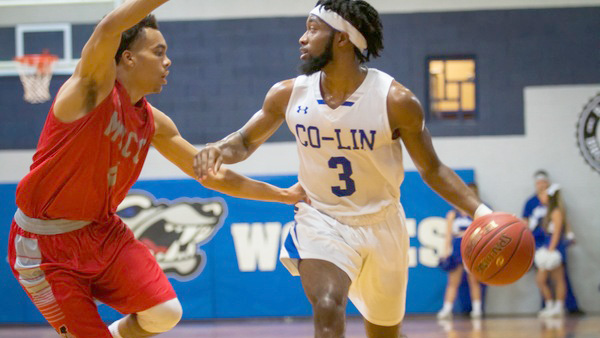 With just four seconds left on the clock, sophomore and Brookhaven native Damarius Brooks hit his eighth three-pointer of the night Monday to put Co-Lin on top 92-90, a score that would stand after Delta’s final possession.

The win moved the Wolves to 5-1 on the year as the Trojans fell to 3-4. Brooks finished the night with 36 points, the most since Jonathan Floyd scored 35 for the Wolves on February 5 against Gulf Coast. Brooks was 8-of-9 from beyond the arc. Co-Lin is back on the road this Thursday, as the Wolves travel to Camden, Ark. to take on Southern Arkansas University Tech. Tip off is slated for 7 p.m.

The Trojans took an early five-point, 7-2, lead, but the Wolves rallied and took their first lead five minutes into the game 12-10 after Cameron Woodall nailed a corner three-pointer. Co-Lin’s offense began clicking and the Wolves grew that lead over the next 12 minutes to 17, 43-26, with just 2:23 left in the first half. A late push by the Trojans cut into that lead, but Co-Lin took a 12-point, 43-31, lead into the locker room at the half.

The second half saw multiple swings in momentum as the Trojans cut Co-Lin’s lead to three, 45-40, in the opening three minutes. The Wolves responded with a run stretched the lead back to double-digits, 57-46, but with every Co-Lin response the Trojans showed up with an answer. This back-and-forth action continued as Delta cut the lead to just five before the Wolves rattled off another offensive explosion led by Brooks that brought the lead to 16, 78-62, with 8:29 remaining in the game. That lead was short lived as Co-Lin managed only five points over the next four minutes as Delta brought the game to just two, 83-81.

Co-Lin hung on to that small lead until the final minute when a turnover and a foul put the Trojans’ Darius Jackson at the line trailing 89-88. Jackson made both shots to take a one point, 90-89 lead, the Trojans first lead since the 16-minute mark in the first half. Brooks hit a corner three on the other end with just four seconds left to give the Wolves a 92-90 lead. Delta had an opportunity on the other end of the floor for a game-tying shot, but the effort fell short.

Joining Brooks with great stat lines were Cameron Woodall who recorded a double-double after scoring 15 and leading the team with 11 rebounds, and Malik Wright who came off the bench to score 17 and dish four assists. Dayquan Perkins hauled in 10 rebounds.