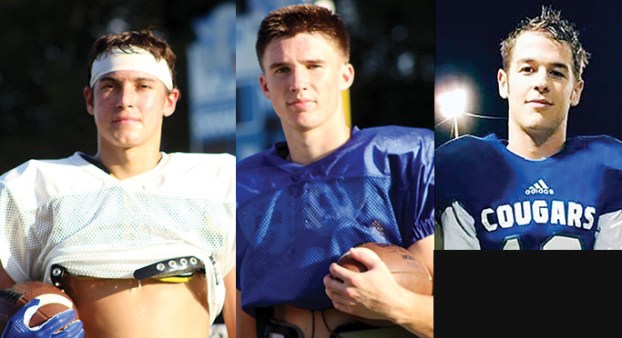 Photo by Cliff Furr From left, Brookhaven Academy wide receiver Cade Brown and quarterback Dawson Flowers will try to hook up for one more touchdown connection on Friday when they play in the MAIS All-Star game at Jackson Prep. Photo submitted/Brookhaven Academy linebacker Cole Griffin will get the chance to tackle his teammates on Friday when he suits up for the Blue team on Friday at 3 p.m. in the MAIS All-Star game.

The senior trio of Dawson Flowers, Cade Brown and Cole Griffin will represent the Brookhaven Academy Cougars Friday in the MAIS All-Star Football Game at Jackson Prep. The BA seniors will take part in the 8-Man/Class A/Class AA game that begins at 3 p.m.

Friday will be one more chance for quarterback Flowers to pass the ball to his favorite target, Brown. In his two-year career as the signal caller for the Cougars, Flowers tossed a combined 46 touchdowns — 67 percent of the time those touchdown passes were thrown to Brown, as the duo connected for nearly 3,000 yards passing and for 31 touchdowns in their time playing together.

The thing they’ll both miss about high school football?

The pair better have their heads on a swivel Friday afternoon, though, as Griffin won’t back down from tackling one of his high school teammates.

The all-star experience has the boys staying in a hotel in Pearl, practicing at Mississippi College and being part of a banquet on Friday prior to the game.

Griffin wants to add one more milestone to that list — recording a sack of his high school teammate.

“I’d like to sack Dawson for a loss,” says Griffin, the son of Dave and LeAnne Griffin.

Griffin — a linebacker — made 67 tackles this season for head coach Ron Rushing and his staff. He also notched eight tackles for a loss while recording one sack, recovering two fumbles and picking off one pass.

Griffin and Brown are both ’16 guys — players who were part of the team in 2016 that was forced to forfeit the final two games of the season due to low roster numbers and injuries. As juniors and seniors, they helped lead the Cougars to combined 18-6 record and an appearance in the AA semifinals.

Rushing says the trio are all cornerstones of the BA football rebuild he’s engineered over the past few seasons.

“These are three fine young men,” said Rushing. “They represent the best of our school and program and I’m glad to see them being recognized for the work they’ve put in. I know they are going to do whatever they can to help their team win on Friday and that’s the same thing they’ve always done for us.”