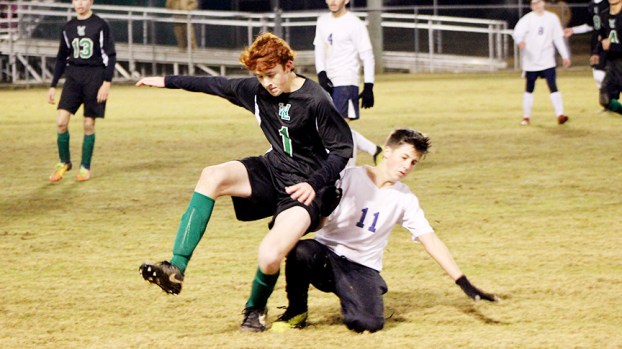 Photo by Cliff Furr Noah Addison of West Lincoln and Tyler Nowell of Bogue Chitto collide while playing for the ball on Tuesday night at West Lincoln. The Bobcats would pick up their first win in program history with a 5-3 victory over West Lincoln.

History was made on Perry Miller Field Tuesday night as the Bogue Chitto Bobcats boys’ soccer team picked up their first win in program history with a 5-3 victory over West Lincoln.

Bogue Chitto is in their second season of soccer and West Lincoln is in year three.

Yosvin Hernandez scored all five goals for the Bobcats in the win. Hernandez is part of a more experienced core that makes up the team in year two for Bogue Chitto soccer.

“Yosvin transferred in this year and he’s a very talented scorer,” said Bogue Chitto head coach Shane Nippe. “He had a hat trick earlier this season against Natchez.”

The match was the first of the season for West Lincoln coach B.J. Smithhart and his team. Jacob Thornhill scored two goals for the Bears and Jacob Lofton scored the other West Lincoln goal.

It’s easy to see the improvements of both teams as they grow their programs. There was a huge cutdown in procedural fouls and an improvement in passing for both teams compared to last season.

Improved participation numbers at Bogue Chitto also has Nippe excited about the future of his program.

“Excited for the kids to get their first win,” said Nippe. “We’ve got some younger kids playing on the varsity level for the first time and they stepped up big tonight.”

The girls’ game was equally entertaining and tight, as the two teams ended regulation tied 1-1. When both sides failed to score in overtime the game went to a shootout to decide the winner. In the shootout, it was West Lincoln who took the victory by a margin of 3-2.

In regulation it was Brooklyn Griffin scoring for West Lincoln and Garielle Daniels getting a goal for the Lady Bobcats.

Bogue Chitto hosts Wesson tonight and the Bears next play when they host Wesson on Dec. 4.