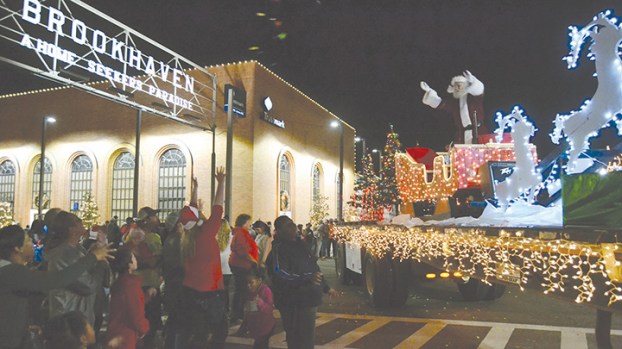 Santa and his crew will be throwing more than a ton of candy tonight at the annual Brookhaven-Lincoln Coucffnty Christmas Parade, but no umbrellas.

Those you’ll need to bring yourself.

“If you want to stay dry bring the umbrellas,” said Mike Edmonston, chief meteorologist with the National Weather Service in Jackson.

He’s forecasting a chance of rain throughout the day starting at 30 percent and moving up to 40 percent by the afternoon. When the parade rolls at 6:30 p.m. it will be down to about a 30 percent chance of wetness, he said.

Good news though — even lower if it rains. The highs today are topping out in the lower 70s and the lows are in the lower 60s. There’s no thunder and lightning expected and it won’t be windy.

Several areas will be closed at 5 p.m. today to move floats across the downtown area to begin lineup for the parade, said Katie Nations, program director for the Brookhaven-Lincoln County Chamber of Commerce.

Those areas are the three-way stop at Schwem Avenue, Curran Street and Brookway Boulevard to Monticello Street at the Mississippi School of the Arts.

Other streets will be closed at 5 p.m. throughout the length of the parade.

Downtown residents are asked to park in alternative parking lots and not park along the parade route, Nations said.

The theme of the parade is “A Storybook Christmas.” Robert E. Tyler from Tyler’s Funeral Home will serve as the grand marshal and Miss Mississippi Asya Branch will also be waving to the crowd from her perch atop a robin’s egg blue 1953 Bel Air convertible.

The parade will start with the fire brigade followed by the grand marshals. Miss Merry Christmas Aly Floyd will be up next and she’ll be followed by Miss Lincoln County Hospitality Madalyn Oglesby and the rest of the parade entries and area bands.

The Chamber will host Santa on a special sleigh at the end of the parade, Nations said. St. Nick and the Chamber’s Junior Ambassadors will toss candy to the crowds.

McLane Southern donated 2,700 pounds of candy for first responders, elected officials, the Junior Ambassadors and Santa to throw at the parade.

Brookhaven schools could see a cut in MAEP funds again if a flu bug bites the district. The district’s payout... read more