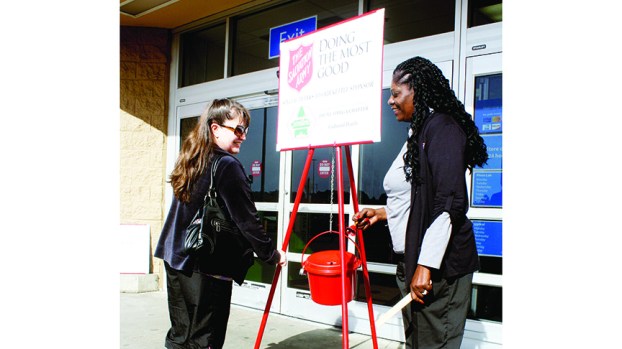 The Salvation Army’s bells are ringing

It takes more than just waving the bell around.

Salvation Army volunteer Keith Penton has a system for soliciting donations while he’s working the red kettle outside the front door at Walmart in Brookhaven. The first step is to get shoppers to stop walking. Then, he tries to get them talking. Make them smile — he tells them “Merry Christmas,” asks them how they’re doing, throws in a “God bless” here and there, does whatever he can to turn the interaction from a request for money to a conversation with a friend.

Get them that far, and they’ll stick a few dollars in the slot, Penton says. Then, everybody’s happy.

“Some people come out frowned-up, but when they leave that kettle, they’re happy,” he said. “They get their blessing in.”

Penton, of Tylertown, works all around the local Salvation Army’s region, which services Adams, Amite, Lawrence, Lincoln, Pike, Walthall and Wilkinson counties, as well as Concordia and Washington parishes in Louisiana.

This week, he’s pulling 11-hour shifts in front of the Brookhaven Walmart for two reasons. One reason is he enjoys volunteering — “if you got Jesus in your heart, you don’t mind helping,” he says — and the other reason is the Salvation Army needs more manpower for the Christmas bell-ringing campaign.

Brenda Kates, director of the local Salvation Army service center in McComb, said the group needs more than 100 volunteers to cover the bell-ringing campaign, which runs from Nov. 23 to Dec. 24 in Lincoln County at the front doors of Walmart, Piggly Wiggly on Hwy. 51, Save A Lot and Walgreens. That would be enough to get all the kettles covered for a full day of bell-ringing — the number would need to be doubled to allow the volunteers to work in shifts.

“The bell-ringing campaign is our biggest fundraiser of the year, and it allows us to provide services to this area,” she said.

Kates said 82 cents of every dollar donated is spent on the program’s ministry in the local community.

“Our organization is a good steward of your money. We will treat a penny like $100,000 — every gift, no matter the size, is used responsibly,” she said.

Any church groups, businesses, organizations or individuals who wish to volunteer to ring the bell for the Salvation Army this Christmas may contact the organization by calling 601-660-2020. The organization needs all the help it can get to raise money — Kates said a recent restructuring took away some coverage and fundraising areas, and the bell-ringing campaign has been on the decline in recent years.

“The Salvation Army is feeling the pinch a little,” she said. “So, we’re asking our communities to dig a little deeper.”

Kates said the organization has taken on some new programs in an attempt to make up for some of the money missing from the lessened bell-ringing campaigns, and one of those efforts is to seek sponsorships for the kettles.

Brookhaven’s A2Z Printing will hang its sign on one of the local kettles. Chief operating officer Willie Greer said he was glad to pitch in and help an organization founded on principles of faith.

“This cause has proven, over time, to be responsible — the money stays in the community,” he said. “The Salvation Army is time-tested, proven.”

Greg Marlow, operations manager for R.B. Wall Oil Co., said his company is also drawn to the Salvation Army’s ability to keep the bulk of donations in the community.

“Your money’s not going to New York,” he said. “That’s important. With some other organizations, only pennies on your dollar actually go to the cause.”

A2Z Printing Manager Ryan Adair, who serves as chairman of the local Salvation Army Board of Directors, said the organization has a thorough system for vetting charity applicants to ensure donations are going to those in the greatest need.

“That’s why anyone can be confident in giving to the Army,” he said. “There’s lots of looking into each situation — the Army doesn’t just hand out money.”

Larenda Harrison, a member of Brookhaven’s Phi Mu Omega chapter of the Alpha Kappa Alpha Sorority, Inc., said her organization is sponsoring a kettle because the sorority’s motto — “service to mankind” — aligns with the mission of the Salvation Army.

“The tie-in there is undeniable,” she said. “This is what Jesus would have us do — be a service to mankind.”

Santa and his crew will be throwing more than a ton of candy tonight at the annual Brookhaven-Lincoln Coucffnty Christmas... read more