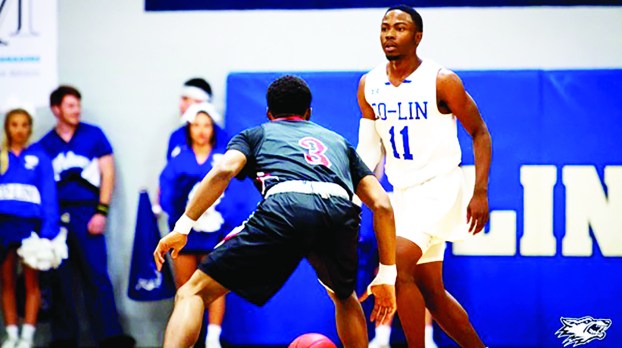 Photo by Co-Lin Sports Information Co-Lin sophomore guard Xavier Heidelberg advances down the court in a matchup earlier this season. The Wolves’ had an 91-87 overtime win against the Southern Arkansas University Tech Rockets Thursday.

The Copiah-Lincoln Community College Wolves snuck by the Southern Arkansas University Tech Rockets 91-87 Thursday in a game that was tied on 11 occasions and had 18 lead changes.

The win improves Co-Lin to 7-1 on the year and drops the Rockets to 6-5. Co-Lin is on the road yet again next Monday, as the Wolves face Pearl River Community College in Marvin R. White Coliseum on PRCC’s campus in Poplarville. Fans can keep up with the action by listening live at colinathletics.com.

After 10 minutes of play, the lead had already changed hands four times as both teams played very quick and very physical. With 10:05 left in the first half the Rockets led Co-Lin 19-15. The Wolves rattled a 7-1 run over the next two minutes with the help of some second-chance baskets, but the small two-point lead was short lived as the Rockets rallied to regain control 26-25. This back-and-forth action continued until SAU Tech went on a 7-0 run to stretch the lead to six late in the first half. A three by Damarius Brooks and a pair of layups from Malik Wright and Cameron Woodall helped get the Wolves back in the game. The Rockets took a one point 39-38 lead into the locker room.

The Rockets came out of the locker room with the hot hand as the team did not miss a shot from the floor for the first 10 minutes of the second half. SAU Tech grew the lead to seven early in the second, but some big three-pointers from Lazorian McNulty, Damarius Brooks, and Miles Daniels, helped keep the Wolves close.

In the final 10 minutes of regulation, the lead changed hands another nine times. A mid-range jumper from McNulty and a free throw Woodall put Co-Lin on top, 79-77, in the final minute of play, but SAU Tech’s Immanuel Anderson scored in the final five seconds to knot the game at 79-79 and send it to overtime.

The Wolves never trailed in overtime as Woodall drove to the basket on the first possession to give Co-Lin an 81-79 lead. The Rockets tied the game for the final time at 85-85 with 1:08 on the clock, but Daniels gave Co-Lin the momentum with a big three-pointer to break the tie with 42 seconds remaining. Xavier Heidelberg and Brooks helped fend off the Rockets late with successful trips to the free throw line to solidify the 91-87 win.

Damarius Brooks led Co-Lin for the second straight game in scoring with 20 points after going 7-of-10 from the floor. Miles Daniels added 18 points, while Cameron Woodall posted his second straight double-double with 13 points and 15 rebounds. Malik Right rounded out the double-digit scorers with 14 points. Xavier Heidelberg led Co-Lin with five assists on the night.